This is the second in my series of Berlin posts from my trip over Easter 2015. (For my first to Cafe Anna Blume follow this link…)

In previous trips to Berlin I have tried to go for a mixture of traditional German cuisine as well as starred fine-dining (this led to one of the best meals that I’ve ever had, at the Lorenz Adlon Esszimmer). For this trip I’ve decided to only focus on more traditional eateries (due partly to the fact that we’ve got a trip to Bordeaux planned for June, which I suspect will provide far too many opportunities for top-end dining). With this in mind I decided to research traditional German restaurants that focussed on doing simple things, very well. 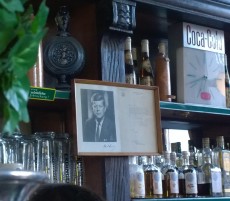 This is what brought us to Henne in very trendy Kreuzberg. As soon as you walk in the door you realise that this is the kind of place that hasn’t really changed in many, many years. The restaurant is clad in wood throughout, but has some fascinating details including beer pumps decorated with silver Adlers (Eagles), the German national emblem, which look as though they were there installed at the end of the late nineteenth century in Bismarck’s time. Over the bar hangs a picture of John F. Kennedy aside a letter that he wrote to the owners. JFK was invited by the owners to take a drink at Henne when he was famously in town in 1963 (ich bin ein Berliner…), but the invitation was declined citing an unfortunate lack of time.

The owner was clearly touched by receiving a letter from JFK offering his apologies at not being able to take up their offer and it has hung over the bar ever since. Just a couple of years later Henne witnessed history firsthand as the locals had to watch as the Berlin Wall was constructed just metres from its front door.

We were, in truth, rather fortunate on our visit. We hadn’t booked and you really should book ahead, particularly for a Saturday evening. As we arrived we were told that every table in the restaurant was booked all evening. However, they did have a bench that we could share with another group who hadn’t booked, which we were very glad to take them up on!

The menu in the restaurant is very limited, but that isn’t really a problem as everyone is there to eat the same thing – their world famous Jungmasthähnchen (chicken). The chicken is broiled in milk before being fried. Now, I am not really a fan of fried chicken in the UK and cannot understand how people can eat it. However, this was something completely different. The chicken is fat, juicy and moist; and the skin has taken on a wonderfully flavoursome crunch. This is tremendously satisfying and welcoming food. On the menu they ask you for patience when you order as each piece of chicken is cooked freshly to order. It is definitely worth the wait. We ordered a couple of sides: a potato salad, which was a little disappointing as the sauce was too sweet for me; a pickled cabbage salad, which was very nice.

They had an interesting selection of beers in tap to wash the chicken down with. One of the advantages of sitting next to the bar was that I could work my way through them…! My favourite was the Kloster Schwarzbier (see right), which tasted like a rather smokey porter.

I can confidently say that this is the best fried chicken that I’ve ever eaten (which probably doesn’t mean much…!), however, it is somewhere that I would certainly go back to again and would heartily recommend to anyone travelling to Berlin.

Do make sure that you book though…