Great food doesn’t always need a great setting, but it can help. Sometimes the environment that you find yourself eating in can help to enhance the culinary experience. I think of eating some delicious seafood whilst sitting at a restaurant that overlooks the Amalfi Coast; of soaking in the sights and sounds of the Marrakesh souks whilst you eat in the market stalls of the Jemaa el-Fnaa; or crouching on a plastic stool in Hanoi, tucking into some street food as the scooters whizz by. 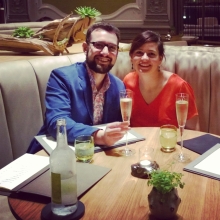 This was also the case, for me, with my visit last week to Simon Rogan’s restaurant, “The French”, situated in Manchester’s most glamorous hotel, the Midland Hotel. As we walked into the hotel (up a red carpet, nonetheless) we were greeted by a doorman in a top-hat who opened the door for us. We were ushered over to the restaurant itself which is found in a beautifully ornate high-ceilinged Edwardian style. We were shown to a rather opulent booth in the centre of the room, which allowed us to appreciate the style and sophistication of our setting and would prove to enhance our fine-dining experience even further.

Simon Rogan is the much vaunted head chef of Cumbria’s 2* sensation “L’Enclume”, which is high up on my ‘List’ of restaurants that I would dearly love to visit and has been for quite a while. Rogan is a British cooking institution who focusses on showcasing local ingredients in all of their glory; in recent years he has expanded his restaurant empire considerably with the addition of “Fera” at London’s Claridges hotel and “The French”.

We started our meal with a glass of 2010 Nyetimber Classic Cuvee (Sussex, England) which is a great aperitif, with a nice tart fruitiness coming from its Chardonnay-led blend.

On a Friday evening the restaurant only offers its 10 course tasting menu, so we dived straight on in. First up were three delightfully thought out and presented morsels; a Crispy Pig’s Trotter and Belly Bite coated with Breadcrumbs and served with a Hay Emulsion (see picture right), a Parsnip Crisp served with a Smoked Eel Cream and Leek, and a deep Hen of the Wood (Mushroom), Turnip and Beer Bread Bowl. Each of these little dishes brought an intense collection of aromas and tastes that got the mouth salivating and the stomach rumbling. We were ready for the main courses. 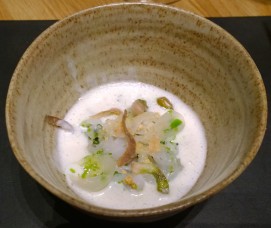 Our first main dish was Squid with Almond served with Onions, Chives and Cauliflower Milk. The squid was cut into extremely thin and delicate strips, the texture of the squid was wonderful – so juicy and tender, not at all rubbery. The cauliflower milk was unexpectedly delicious, it had an extremely rich flavour to it that really did pair nicely with the squid. A theme throughout this review will be the surprising and, frankly brilliant, wine pairings from the restaurant’s sommelier. This started with the first pairing a 2013 Nova Tomus, Riserva Cantine Terlano (Alto Adige/Südtirol, Italy) a blend of Pinot Blanc, Chardonnay and Sauvignon Blanc which had a nicely grassy note to it which was coupled with a slight hint of waxiness. The result was a bright and fresh wine that cut through the depth of the cauliflower milk nicely.

Next up was one of the most memorable dishes from the evening, Ox in Coal Oil, served with Pumpkin Seeds, Kohlrabi and Young Shoots. The ox was essentially served as a carpaccio with a slight smokiness coming from the coal oil that coated it. The little balls of Kohlrabi served to add a little texture to the dish for a bit of contrast. You’d be forgiven for thinking that the sommelier would have gone for a red wine match with the ox, but you’d be wrong – instead he picked a 2009 Le Soula Blanc, Domaine Le Soula (Vin de Pays de Cotes Catalanes, Languedoc-Roussillon, France) a blend of Sauvignon Blanc, Grenache Blanc, Macabeu, Vermentino which thanks to its oak ageing and its relative age had a nice buttery note to it. What I particularly liked was how this wine trod the fine tightrope between acidity and breadth to result in a balanced wine that complimented the ox nicely. 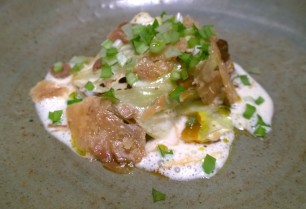 We then moved on to Cornish Crab served with Caramalised Cabbage, Chicken Skin and Horeseradish. For me the star of this dish was the crispy chicken skin which had a nice crunch to it. The horseradish was carefully matched to provide a subtle doff-of-the-cap in revealing its presence. Whereas the last course you could would have guessed at a red match, with this course the sommelier pulled out another curve ball and opted for a red, a 2013 “Cuvee VV”, Domaine du Cros (Marcillac, France) made from the relatively obscure Fer grape. It had a very interesting aroma that we characterised as a sour cherry/frangipani mix, on tasting I found it had a pleasant enough cherry taste, but didn’t feel that the match quite worked on this occasion. 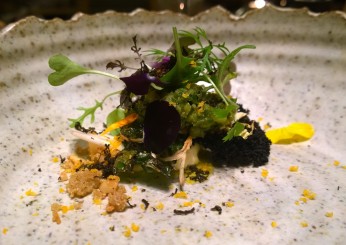 Next up was, for me, probably one of the most astounding wine and food combinations that I have ever had. We were served a Westcombe Custard (a thick cheese sauce made from a rich and nutty cheddar) served with Crispy Kale, Fried Bread, Hazelnuts, Ramson Capers and Herbs. This was essentially a salad, but an extremely interesting and flavoursome salad with the cheese sauce adding a richness and comlexity to it. So, where would you go with the wine match? I bet you wouldn’t have guessed at a NV Ice Cuvee Classic, Peller Estate (Niagara Peninsula, Canada), an off-dry sparkling white made of a Pinot Noir and Chardonnay blend, would you? The sparkling wine has a dosage of Eiswein, which gives it its sweetness and results in flavours of honeysuckle and passion fruit. A truly left-field match that I would never have picked myself – bravo somm.! 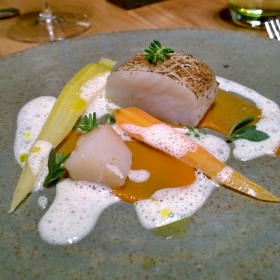 Probably the nicest single dish of the meal was up next, Butter Poached Hake, Carrots cooked in Whey, Smoked Scallop and a Roe Butter Sauce. Quite simply every element on this plate was absolutely delicious, plus the presentation of the dish made it all the better. Last year I predicted that a fish dish that I had at Hibiscus would be the best thing that I ate all year and I was right; this year I am predicting that this hake will be the nicest thing that I eat all year – it was that good! To serve with this stunning fish we were presented with a 2013 Jermann Vintage Tunina (Venezia-Giulia, Friuli-Venezia) a blend of Chardonnay, Malvasia Istriana, Picolit, Ribolla Gialla and Sauvignon Blanc. I found this wine pleasant, with a nice acidity, if a little one-dimensional. For me it was always going to struggle to stand up against the fantastic hake.

The last of our savoury courses was a Hardwick Mutton Loin served with Purple-Sprouting Broccoli, Salsify and Pickled Elderberry. The first thing that you notice on the dish arriving was the striking pink colour of the mutton, but as you would expect it had been cooked beautifully (in a water bath I presume) to preserve the delicate colouring. The sauce was very deep and shiny and gave a nice colour contrast to the plate. With this dish came a 2013 Bodegas Castano, Solanera Vinas Viejas (Yecla, Spain) made from a Monastrell and Cabernet Sauvignon blend, which was nice, supple and rounded, with slight touches of violets – it reminded me of a crowd-pleasingly satisfying right-bank Claret.

The first of our three (!) puddings was a dish that when you read it you’d be forgiven for not even realising it was a pudding: Roasted Squash with Sea Buckthorn, Sorrell, Malt and Apple. The brilliance of this dish was the contrasts that it contained, from temperatures to textures. The overall flavour was, naturally, very nice too! I’ve had Sea Buckthorn a couple of times now and really grown to like it. This course was paired with a 2014 Grain de Folie, Causse Marines (Gaillac, France) which had some pleasant botrytised marmalade aromas, coupled with some nice stewed apricot flavours.

The highlight of the sweets for me was the next dish, Pears Poached in Rosemary served with a Sweet Cheese Ice Cream, Walnut Biscuit and Honey Mead Syrup. Looking at the list of ingredients you wouldn’t have thought that it would be possible for it to look good, let alone taste good – but boy, did it! The most memorable aspect of the dish for me was the juxtaposition of the spiced pear with the sweet cheese ice cream – it sounds like it simply shouldn’t work, but it really did. To top it all off (literally) was a nice biscuit which gave the pudding a nice crunch. To accompany this dish was the last wine of the evening (number nine, not that I was counting…!) a 2008 Vendanges Tardives Gewurztraminer, Trimbach (Alsace, France) which had those heady and delicious Gewurztraminer aromas of lychee, mango and Turkish Delight – a great accompaniment for this beautiful dish.

Last up for us in terms of food was the simply titled “Sass ‘n’ Soda”, which was Rogan showing us his playful and nostalgic side. This was a nod back to childhood memories of sipping Dandelion and Burdock and eating sweets, a really fun and satisfying way to end a stupendous meal.

I can’t finish this review without noting the excellent staff at The French. They had answers to all of my questions (I tend to ask a lot of questions about the dishes, much to my wife’s chagrin) with great humour and great enthusiasm. There are usually two kinds of tables, in my humble experience; those who want to have a meal with their friends/family and don’t want to be disturbed or interrupted by the waiting staff, and those who are looking to engage with the staff to learn more about the cooking and the ethos of the restaurant. I always feel that you get more out of the dining experience when you put yourself in the latter camp, as opposed to the former. The staff at The French recognised that we enjoyed our interactions and consequently they spoke warmly with us and told us bits of information that helped me to write this blog.

I have somewhat of a habitat of predicting restaurants for Michelin stars; without wanting to “do a Paddy Ashdown”, I would eat my hat if The French is not awarded a Michelin star this Autumn, in fact I would say that it deserves two. If you find yourself in Manchester any time soon then I would wholeheartedly urge you to go to The French, as when it gets its stars (and it is ‘when’ rather than ‘if’) the prices will probably go up accordingly.