Isn’t it great when you find a wonderful restaurant? One that is good value for money, has excellent staff, exciting food and an interesting wine list?

Wouldn’t it be great if that restaurant was at the end of your road?

That was exactly the experience I had a week ago. We’d passed a restaurant in Honor Oak Park regularly since we moved to Forest Hill and had meant to go in but never quite got around to it. Then we saw a sign up: “voted best Indian restaurant in London, 2013 by Zagat”. Wow. We had to check it out.

This is no average neighbourhood Indian restaurant. It does well thought out, well presented Indian food from a number of regions and also showcases the tradition of Indian Islamic cooking. To supplement their menu, they provide a relatively extensive suggestion of matching wines by the glass and bottle (not the Islamic section of the menu, of course). This even extends to a selection of dessert wines.

We started by sharing a plate of Haleem with chilli khasta roti, which is neck lamb cooked with wheat, barley and three kinds of lentils and a mix of spices. This plate was from their Islamic menu and is traditionally served to break the fast during Ramadan as it is a slow-cooked dish and hence is easy to get ready for when the sun goes down. This was a very hearty dish, with the lamb nice and tender following the slow cooking. It was garnished with fresh ginger and chillies, which gave it a nice level of heat (although my wife found it a little too spicy, if truth be told). 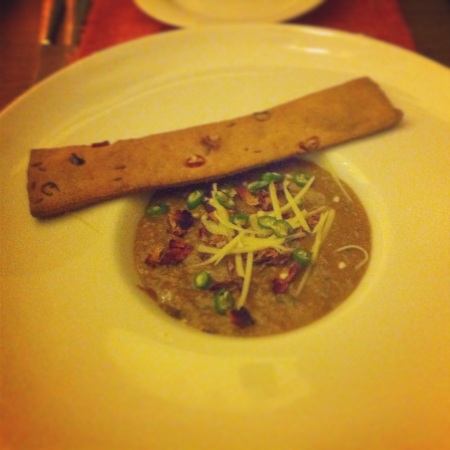 For my main course I went for some more lamb, this time their steamed, spice-crusted shoulder of lamb served with beetroot khichdi (a beetroot rice). This lamb was marinated in Punjabi spices for 100 hours prior to cooking and it was certainly packed full of flavour. Once more the lamb was deliciously tender and succulent and really enhanced by the deep flavours of the spices that it was marinated in. 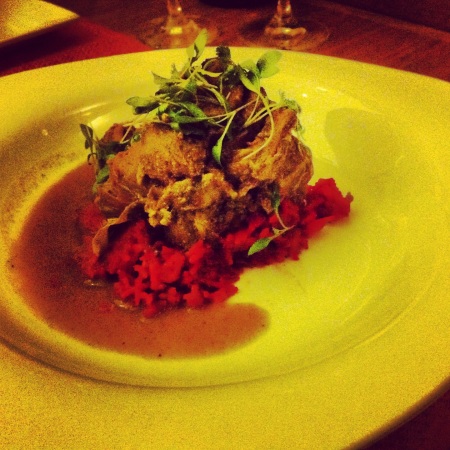 My wife plumped for the Assamese duck, which was steamed and served in a banana leaf, along with some sticky rise. This duck practically fell apart when the leaves were opened it was so tender. 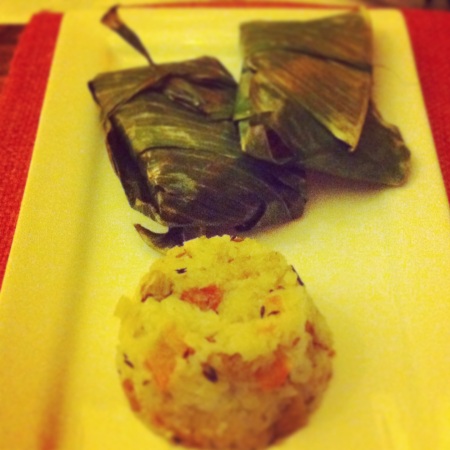 We shared a bottle of wine with these main courses as, fortunately, we had the same wine suggested for our two meals: a 2010 Shiraz and Viognier blend from Willunga 100 in McLaren Vale (Australia). A nice fruity wine, with a medium body. Not much evidence of tannins or finesse, but with the big bold flavours of our dishes we weren’t necessarily looking for finesse. I think this was a good match for my dish in particular, but we weren’t certain about the match with the duck dish.

For pudding we shared again, this time a black cardamom and cinnamon spiced chocolate fondant, served with a pistachio gelato. As you will see from the picture this was a very attractively presented dessert, which passed the ultimate fondant-test and was pleasingly gooey in the middle. The spices in the dish really came through nicely and gave it a very distinctive taste. 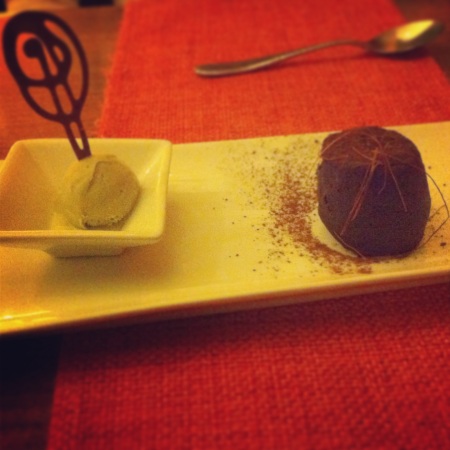 I asked for a dessert wine to have with this pudding and to my surprise I was offered a glass of the 2006 Dulce Monastrell from Luzón – a Bodegas that I visited in June (https://timmilford.com/2013/06/19/wine-on-the-costa-blanca/). Perhaps the wine world isn’t as big as I thought! It was a decent enough pairing, but more than anything I was delighted to have a pudding with such finesse and style and a dessert wine to match it with. A further reminder that this is not your average Indian restaurant.

All-in-all this was a wonderful meal in a great restaurant, made all the sweeter by the fact that the journey home was only a fifteen minute walk.

We will be going back. Soon.

Over the last few weeks as we have come to deal with the realities of the #covid_19 #lockdown, @jameshubbard113 and I have been encouraging people to reach for their better bottles as something to look forward to. This has given rise to the hashtag: #seriouswinesforaserioustime. Here are some of the bottles that I have been dipping into over the last couple of weeks. Some beauties in there, purchased from @theatreofwine, @thewinesociety1874 and @the_winebarn.
Been stockpiling wine. Also trying to do my bit to help our some of the amazing independent wine shops, for whom I know that these are really precarious times. These two sets of beauties were from @theatreofwine (now sadly not taking any further orders) and @fvdwine. This lot ought to keep me going for a little while longer...
#seriouswinesforaserioustime The current situation called for some wine-therapy yesterday, which came in the form of a 2004 Oikonomou from @domaine.economou. I bought this wine from @theatreofwine at one of their amazing tastings a few years ago and was inspired to open it by seeing @andrewfriedhoff opening a 2006 the other day. What a treat this was: a beautiful, fragrant, pretty nose with a palate that had strong tertiary notes and real power. If you’d have told me this was a top Barolo I’d have believed you. A mind-blowing wine and just what was needed after a difficult week. . Stay safe everyone, be kind and look out for those around you.