Before I started writing this blog, I enjoyed a very nice Tasting Menu in Marylebone’s L’Autre Pied. This restaurant, run by David Moore and Head Chef Andy McFadden, focuses on providing chic and contemporary French cuisine (hence the French name).

Until recently there was a small space down the road from L’Autre Pied, which was used as a pop-up venue for Simon Rogan’s L’Enclume and received rave reviews. When Rogan’s tenure came to an end, Moore moved in to take this space for a pop-up of his own – Pieds Nus (meaning “barefoot”); reuniting him with chef Ed Dutton, with whom he’d worked previously at his other London restaurant, Pied a Terre. They decided to focus on the idea of presenting dishes that were a homage to an ingredient or group of ingredients, with a focus on raw or barely-cooked methods.

The ambience in the restaurant has been thoughtfully created, with the décor complimenting the mentality  behind the food – stripped-back and rustic looking benches, lighting set low; a marked contrast to the polished chic of L’Autre Pied. The idea behind the menu is that you order a number of plates for the table to share, somewhat akin to tapas. Also, as you eat the plates arrive as they are ready, rather than being served all at once.

We started with a selection of breads (bacon and onion brioche, black onion seed flat bread and milk loaf), along with a delicious humus.

After that we grazed on a dish of baby artichokes, wild mushrooms and pine nuts, which were piled ramshackle-style onto an attractive blue plate. At the same time came the most attractively presented dish of the evening, the gorgeous scallop ceviche, served with fennel and cucumber. As you can imagine, this was a very fresh tasting plate, with the fennel and cucumber complimenting the slivers of raw scallops very well. 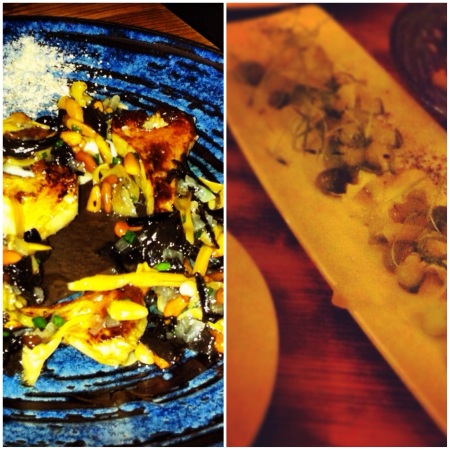 Next came two dishes that I was very interested in. Firstly, a spiced lamb neck served with aubergine and cous-cous. The lamb neck was cooked sous-vide to a temperature of 82.2°, which meant that it was deliciously tender and moist. Then, my favourite dish of the evening; beef tartare served with smoked eel, wasabi and a crisp quail’s egg. I think I liked this so much because of the combination of very distinct, but interesting flavours. I would never have thought that raw beef, smoked eel and wasabi would combine well – but they very much did. The plate was again a rather rambunctious affair, but I liked it.

With our food we drank a 500ml carafe of 2012 Grüner Veltliner ‘Stein und Krems’ from R. Wess in Wachau, Austria. With a focus on clean and fresh cooking, this was a wonderful accompaniment; crispy and dry, with a bite like a tangy green apple. Lovely. It was also very nice to see the option of buying this in carafe form, rather than having to buy the whole bottle.

On the dessert front, I plumped for a truffled brie served with fig. I also took a very pleasant glass of Graham’s 2000 Tawny Port along with this, which had just the right amount of sweetness to cut through the powerful brie. My wife decided to have a deconstructed New York cheesecake, featuring blackberry ice cream and blackberries. This was a very attractive looking dish and had very pleasing flavours.

Overall, I greatly enjoyed this dining experience; particularly the focus on showcasing wonderful ingredients and simple cooking techniques. However, it was pretty expensive for what we got in terms of food. We certainly didn’t overeat and the bill came to over £100 for two.