There can’t be many hotter places at the moment than Restaurant Story, set in Bermondsey under the imposing shadow of the Shard. Getting a reservation is quite difficult, with tables only being released on the first day of every month for the next month and most of the tables being snapped up in a jiffy. In head chef Thomas Sellers, they have one of the youngest Michelin starred chefs in the country and, to my mind, certainly one of the most innovative and exciting. As you will be able guess from the restaurant’s name, its emphasis is on providing the diner with a tale to tell others; somewhat appropriate then that I should write a blog on it!

There is no a la carte menu at the restaurant, simply a choice between the six or the 10 course menu. As this was a Wednesday night dinner, we decided to opt for the six course menu. This proved to be a wise choice as whilst we were waiting for a first course to arrive we were presented with a wonderful selection of “snacks”; petite, delightful morsels designed to excite and entertain. The plates arrived in such a flurry that I must confess that I wasn’t able to record what they all were! However, I hope that the photo collage I put together of some of them demonstrates the ingenuity of the kitchen team.

We were allowed a little interlude after the “snacks” before we started the tasting menu for real. The first course (or given the restaurant’s name, should that be “the first chapter”?) was intriguingly entitled “bread and dripping”; a candle was set on the table and we were presented with a basket of bread and a pickled sauce – but where was the dripping? The waiter unveiled the secret; the candle was made from beef fat and as it burned created a pool of dripping at the bottom where the wax would normally collect. Of course! To accompany this course I had the 2011 J. J. Prüm Riesling Kabinett (Wehlen, Mosel), which was deliciously fruity, clear and vibrant with slight hints of tropical fruit on the palate – a wonderful match to the fat of the dripping and the bite of the pickles.

The next course was entitled “onion, apple and old tom”. As ever with this menu, the name of the dish is a rather understated affair compared to what you are actually presented with. The onions are slightly burnt to give them a slightly tacky texture, a sweetened flavour and an interesting colour. The apple is also burnt to create a similar effect. There are all sorts of intricate dots of flavourings and colourings that create for an extremely attractive dish. 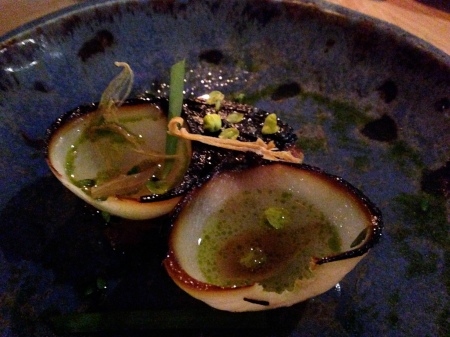 Before our third course we took an optional extra course (after all, six courses really isn’t enough on a Wednesday evening, is it?). This was a beef tartare, but served with a twist (of course!). We were presented with an apple on a bed of ice, which when we opened it up contained some of the most glorious beef tartare that I have ever eaten. 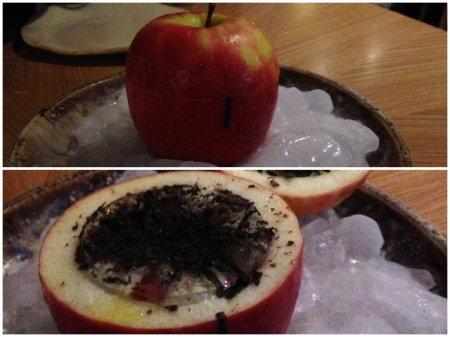 The story continued with “heritage potato, turnip and coal”. Yes, coal. The mashed potato was as smooth as James Bond in a bar with a vodka martini in his hand and a beautiful woman in his sights (sorry, I won’t try a simile look that again; I promise). What was different, however, was the coal sauce which was rich and unctuous with an underlying bitterness. I can honestly say that that was the first time that I’d been served coal at a restaurant! So, how do you match a wine to a course featuring coal? Well, the head sommelier, Fergus, chose a 2011 Grüner Veltliner from Muhr van der Nieeport (Austria), which had aromas of cheese and truffle with a slight hint of white pepper. A complex and interesting wine to match with a unique dish.

The courses kept coming at us! Next up in the tale was “beef, grains, watercress and sloes”, which was the only meat dish on the main six course menu. The picture doesn’t really do it justice, but the meat was just sublime. It is cooked slowly and delicately sous-vide to make it wonderfully tender. The accompanying grains and sloes added complexity and flavour to the dish. This was my second favourite dish of the evening. To go with the beef we had a 2012 Syrah, Mourvedre and Grenache Blanc, ‘Intellego Red’ from Swartland, SA. At first it was quite heavily perfumed wine, which after a minute or so settled down into a smooth tasting, fruity and refined red. A terrific accompaniment to that lovely beef. It is quite rare that I say this of a red, but this was my favourite wine of the evening; really classy and elegant – I will be trying to source a bottle or two of this for my collection.

We were on the home straight now. The first pudding course (the words that any bon viveur loves to write) was my favourite course of the evening as it epitomised what Restaurant Story was about. Entitled “almond and dill” it fascinated and tantalised. A pudding course? With almond and dill? Really? Yes, really. This was a serious dish: there was an almond ice cream, a dill emulsion and crisp and an extremely sour sherbert. It may sound odd, but the dill really added character and flavour to this dish and were great in combination with the sweet, creamy almond. Our first desert wine was a 2008 Muscadel Dulce from Bodegas Bentomiz (Malaga) which had perfumed aromas of honeysuckle and lavender. 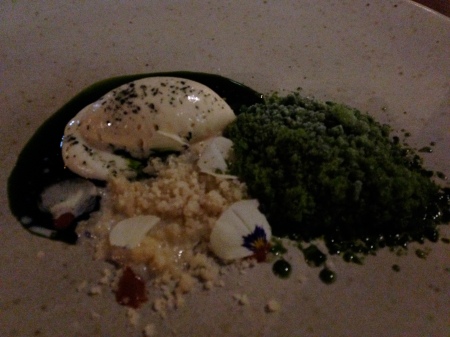 For our last desert course we had two deserts. If I were in the film “Se7en” gluttony would certainly have been my deadly sin. Truth is we were allowed to sample one of the signature dishes from the ten course menu as an optional extra… The first was the regular second desert “English pear, artichoke and verbena”, whereupon we were informed that everything on the plate we thought was a pear, wasn’t, and everything we thought wasn’t a pear, was. Capiche? This was certainly a clever dish, although I didn’t like it quite as much as the last course. This was served with a 2010 “Renaissance” (Domaine Rotier, Gaillac) which reminded me of a light, delicate Sauternes. 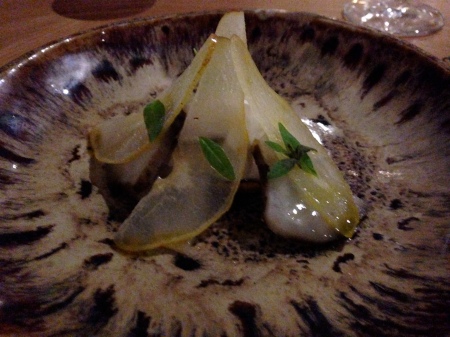 The second sixth course was playful and humourous and characterised the sense of fun that permeated throughout this tasting experience. It was their take on ‘Goldilocks and the Three Bears’, we were presented with three bowls of porridge, one was too salty, one was too sweet and one was ‘just right’. What was interesting was that I was asked which I thought was which and, of course, I put the one that was supposedly “too sweet” as “just right”; I’ve obviously got a sweet tooth!

So, six courses of culinary genius. Actually, eight course of culinary genius, plus a load of pre-courses. This was exciting, innovative cooking full of interesting flavour combinations and well thought out dishes. There was just the right mix of theatre, exhibitionism and flair. A word on the service too, the waiters were all extremely enthusiastic and put up very well with all my inane questions about how the food was prepared and Fergus also gave us interesting notes on all of the wines that we were tasting.

Overall, the hype surrounding this restaurant is well justified. Thomas Sellers and team will go on to bigger and better things in the future, but right now they are doing something wonderful and I heartily recommend being a part of the story.