Some things are so good that they are simply worth doing twice. (I initially made a rather lame innuendo here, which I have since dutifully redacted – consider yourself lucky!) So it was for me and the Hand and Flowers. I went there last year on a Sunday for a stupendous Sunday lunch (which incidentally is still the most-read blog on this site) and when I was deciding on a special venue to take my brother for his birthday this was the perfect option.

One of the great things about being a pub (although a rather special pub) was that we could start the meal with a pint. The beer we went for was a rather lovely drop of the Rebellion Beer Company’s (based locally in Marlow) IPA, which was fruity and hoppy and perfect for whilst we made our menu choices. At which other two Michelin starred restaurant can you sup an excellent ale whilst you order? 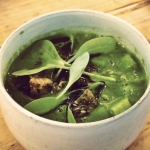 As an appetizer we were given some crispy whitebait and home-made Marie Rose sauce, along with some rustic bread. For a starter I opted for a dish that my wife had last time we visited, Lovage Soup with Bramley Apple, Smoked Eel, and Ham and Cheese Tortellini. The Lovage gave the soup an exciting bright green colour, but for me the star of this dish was the delicious Smoked Eel morsels, which added an intriguing flavour contrast to this soup. 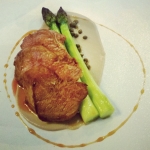 For main course I went for the Rump of Veal with English Asparagus, Ossobuco, Polenta Gremolata and Marsala Sauce. The Veal was delightfully tender and soft. As someone who is a fan of both green and white Asparagus, these were a real treat – cooked slightly al dente, they retained a nice bite and freshness. The dish came with an interesting side of Polenta Gremolata which was full of nutty little morsels, had a slightly lemony flavour through it and gave an interesting textural contrast. The Marsala Sauce was rich and slightly sweet but I would have liked to have a little more of it to be honest.

With the main course we were trying to match my veal and my brother’s duck and concluded that a Pinot Noir would work the best. We selected the 2011 Calera, Central Coast (USA), which had plentiful red fruit notes on it (as would be expected from a young Pinot Noir) but also a slightly tannic touch, which gave it some weight. Very nice. 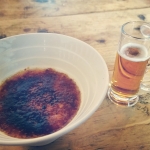 Initially I tried to exercise a modicum of restraint when it came to this lunch and when we discussed as to whether we would have a pudding or not I opted for abstemiousness. However, when the others started ordering a pudding my inner glutton came out and I couldn’t resist ordering the Vanilla Crème Brulée, which came with a sweet little shot of Innis & Gunn ale. The Crème Brulée had a delightfully sugar-top, which was very satisfying to crack with the back of my spoon. We shared a lovely glass of Sauternes with our puddings, which was the perfect ending to such a wonderful dinner.

There is a waiting list of about three months for tables at the Hand and Flowers for Friday/Saturday nights or Sunday lunches and I hope that this post suitably explains why. All I can suggest is that you get a booking yourself and check out this great restaurant!

One thought on “Hand and Flowers Revisited”