Sometimes it’s difficult when you walk into a wine shop and are trying to decide on a bottle of wine, particularly if you are thinking of trying something different, a new region or a new grape, for example. What if you don’t like the new wine you choose? What if you’re taking it round to a friend’s for dinner and it turns out to be awful? Nightmare! Wouldn’t it be great if there were a wine shop that allowed you to sample its wine selection before you buy?

Well, step forward The Sampler. I visited their branch in Islington which was the first shop in the country to feature the revolutionary Enomatic machines. These machines are essentially wine vending machines; bottles of wine are opened and then hooked up to it so that you can sample from it. The clever part is that the wines are hermetically sealed so that they stay good once opened; as wine is extracted from the bottle, air is prevented from entering meaning that the contents are preserved (in practice they can stay on the machine for about a couple of weeks without the contents being spoiled). The sheer beauty of this system is that one can then select a small quantity of a wine to sample and hence decide whether or not it is suitable for purchase. At the Sampler you can take wine in 25ml, 50ml or 75ml samples.

Dawn, The Sampler’s manager, explained that at any given time they have 80 different bottles of wine open and available on the machines to sample. These wines vary from bottles under £10 to top Bordeauxs that costs hundreds of pounds per bottle. They make a point of having some stellar names open for people to try (even if the samples do cost over a tenner!), but what better way to try a top wine before you buy? If you were going to shell out hundreds for a bottle, it’s quite nice to have the option to give it a quick test drive before you buy! 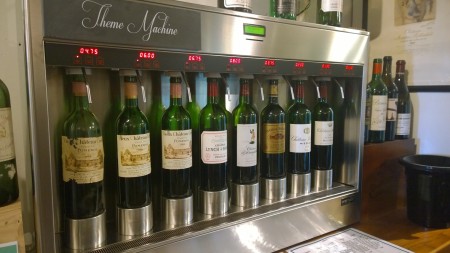 The wines are also grouped by type. For example, they have a Chardonnay section, a Riesling/sweet wine section, a Spanish reds section, etc. Dawn explained that the idea here was simple, many people come in with a preconception; for example, “I like Sauvignon Blancs from New Zealand”. At The Sampler they exhibit a New Zealand Sauvignon Blanc next to ones from the Loire so that people can experiment a little. Many people find are surprised that although they liked the NZ version, they also liked the other varieties.

The payment system is also very clever. You pay using an electronic card which you top-up with money (like an Oyster card). You then put the card into the machines and away you go.

While I was there I thought it would be rude not to try some of the wines on show:

Trying these two wines was perfect for me, seeing the difference of expression of the Chardonnay grape between the Old World and the New World. It would be easy to “play it safe” and buy a Meursault, but if I were to choose between these two wines I know which one I would be buying!

Now for some reds…

1999 Chateau Musar (Lebanon), £34/bottle, samples: £1.70 for 25ml, £3.40 for 50ml, £5.10 for 75ml. I was delighted to see this wine available to taste as I had read a lot about it in recent times. As you would expect from a 15 year old wine, the colour was very much faded, but it had a deep and complex aroma featuring earth and tobacco. I was a little disappointed with the taste, lacked body and was a touch astringent. I wouldn’t buy this one, but I am keen to try a younger vintage and see how I get on with that, 6.0/10

There you have it, five wines tasted all for under £10. Armed with this knowledge I would be a lot more empowered to make a decision about which of these wines I would buy. But the innovation doesn’t stop there! They have a new system which is called “The Growler” whereby they can fill up a pot with 1893ml (64oz – it’s an American system!) of craft beer which when opened at home will give you three and a third pints of ale that taste just like it has been pulled at a pub. They will have four different craft ales to choose from, you have to pay £5 deposit for the pot (which features a picture of Ivy, the shop dog!) and then the ales cost around £12.

With so much choice and a continually changing line-up on the Enomatics I am sure to be returning soon!

The Sampler has two branches in London, one in Islington and one in South Kensington.

(Disclaimer: I did not pay for the samples that I tried. Thank you to Dawn and The Sampler for their hospitality).