I’ve just come back from a week long holiday to a truly beautiful part of the world, the UNESCO world-heritage Rhine valley (Mittelrhein). It features some glorious views and walking routes, as well as the legendary Loreley rock face where a forlorn, young girl with beautiful golden hair reputedly threw herself off the cliffs in anguish at her lover’s betrayal (the stuff of epic German opera).

We were, in truth, very lucky with the weather and the time of year that we chose to explore this area. Autumn brought a beautiful changing of colour to the leaves on the trees, golden-yellows and fiery-oranges abounded. The mornings always started with a low-lying mist-verging-on-fog greeting us first thing, only to be burned away by the sun at about 11 o’clock and give way to glorious sunshine for the afternoon (touching the mid-20s in terms of temperature). These were perfect conditions for hiking.

Here is a picture of a particularly majestic, mysterious morning as our walking route took us into the hills above Rhens:

Misty and atmospheric… Rhens in the early morning

I’ve visited various parts of Germany now (see Berlin post and Schwabia post) and reviewed the food that I’ve found there in an effort to dispel the myth that German food is all about stodge and Wurst. Actually I can’t fully dispel that myth, a significant part of German cuisine can indeed be found in stodge and Wurst, but there are also a lot of other delicious morsels that one can find. The aim of this post is to detail some of the highlights from what I came across.

As we were out hiking every day we tended to work up a fair appetite come lunchtime, as you would expect, and wanted something reasonably substantial, but that didn’t fill you up too much in advance of the afternoon’s scheduled rambling. We found a lunch that fitted these criteria precisely: flammkuchen. Flammkuchen is made from a bread dough which is rolled out into a thin shape and then given a variety of toppings before being baked in an oven. We had a number of different styles of flammkuchen during our holiday, one of which can be seen below:

The best ones that we had didn’t let the dough get soggy at all and had a nice crispy base. We had a number of different styles of toppings including a “Hunters'” one featuring salami, wild honey and walnuts, which was very nice; but to my mind the best ones were the ones that had a crème fraîche base with plenty of lardons, This was a lovely fresh style of dish that was just crying out for a nice glass of trocken Riesling, which fortunately were always on hand.

Another feature of this region and this time of year, in particular, is the proliferation of hausgemachte Zwiebelkuchen (home-made onion cake) and a glass of excellent Federweißer. As you walked around the villages of the area it seemed like all of them were advertising for this. It was impossible not to succumb, several times. Federweißer (literally: “feather light”) is a very young form of fermented grape juice and is typically drunk a lot as the harvest starts to come in. It is a very low alcohol drink (typically around four to five per cent ABV) and has a sweetness and effervescence that makes it deliciously moreish. You could knock back a bottle of this stuff on a Sunday afternoon without it knocking too much out of you. It is usually served with Zweibelkuchen. There is no official way of making it and we noticed quite a lot of variation in styles, but the principle is that it is a pie made with onions, bacon, cream and caraway seeds on top of a springy dough. This was a really delicious dish that was delightfully homely and comforting, without being too heavy. It was a great accompaniment for the Federweißer.

No visit to Germany would be complete without partaking in a late afternoon Kaffee und Kuchen session, which was particularly welcome after a long day’s walking. The variety of home-made cakes on offer at cafes in Germany is very impressive; you tend to get cheesecakes, fruity cakes (I was particularly pleased with a couple of plum cakes that we tried), chocolate cakes, pastries and my favourite – the Schwarzwälder Kirschtorte (better known to most people as the Black Forest Gateau). The most impressive setting we found for an afternoon Kaffee und Kuchen was the delightful Schloss Rheinfels in Sankt Goar, where I took this picture: 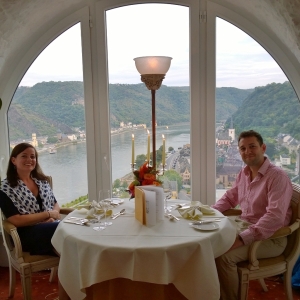 We ate in the Schloss’ Fine Dining Restaurant “Silcher Stuben” and took advantage of their seven course menu. I won’t detail all of the courses here for the sake of brevity, but here were some of the highlights:

The first course that we had was a Fried Charolais Beef Tartar served with Cress Salad and Caramalised Shallots (Angebratenes Tartar vom Charolais Rind mit Kressesalat und Karamellschalotten). It was an interesting concept to take a beef tartar and pan-fry it, but the cooking of it didn’t seem to detract from the excellent flavour and succulent qualities of the beef itself. It was also a really decently sized portion, which was nice for a starter.

In between our fish course and the meat course we were given a rather lovely berry sorbet (beerensorbet), nothing too unusual there you’d think, but what was particularly interesting about this sorbet was served in a nice looking glass and then had some of the house Sekt added to it. This made for a rather glamorous palate cleanser with a slight sweetness from the off-dry Riesling in the Sekt balancing the acidity and sourness of the sorbet.

The meat course was another piece of nice cooking with Saddle of Lamb served with Mustard, Lukewarm Rocket, Cherry Tomatoes with Parmesan and Grilled Potatoes (Lammruecken mit Klostersenf, lauwarmer Rucola, Kirschtomaten mit Parmesan und gegrillter Kartoffel). The parmesan was made into a crisp, which held the cherry tomatoes. The lamb was pink in the middle, but cooked a little bit more medium than I would normally have liked; it was interesting to have a mustard sauce with the lamb, but it did seem to go well with the dish.

The main sweet course was the somewhat comically titled “Variations on a World Heritage Cherry Cake” (Variation von der Welterbekirsche). I asked the waitress what was meant by the title of this dish and she answered that as the Mittelrhein is a World Heritage Site, it must follow that the cherries that come from the Mittelrhein are World Heritage cherries (!) and that the restaurant was looking for a nice way to show-off these lauded cherries. When the pudding was presented to us I could see why “variations” of cherry cake was used in the title – there were various different deserts here, all featuring cherries; including a rather delicious cherry-flavoured crème brulee. The plate was put together really thoughtfully and carefully and presented in a very attractive manner.

This was a rather lovely dinner all-in-all, with a truly wonderful dinner. Rather bizarrely we actually bumped into the Head Chef of the restaurant, Frank Assem, a few days after our dinner at our wine-tasting session at Weingut Matthias Mueller. What a small world!

So, there you have it – the culinary highlights of another wonderful trip to Germany. If you don’t believe me that Germany is a country that you can eat well in I urge you to try it for yourself. You’ll be in for quite a pleasant surprise.