Last year for my 30th birthday my wife earned serious wife points by surprising me with a trip to Heston Blumenthal’s The Fat Duck in Bray, a restaurant that had held the coveted “Best Restaurant in the World” title in 2005. I joked with her that she had set the bar too high, too early; where on earth could we go from here? 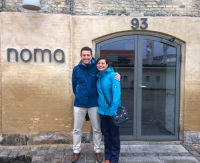 Outside the Best Restaurant in the World!

I should have known that my wife would have had something up her sleeve. A month or so ago she told me to book a couple of days off work last week and then gave me a knowing wink. I was intrigued. Imagine my delight then when I found myself in wonderful, wonderful Copenhagen and on a blustery lunchtime walking through the Christianshavn district to Noma – a restaurant that has long been very high up on my “List” and finds itself currently ranked as the world’s best restaurant. Noma has held this lofty position for four of the last five years; so they are no flash in the pan (other lame culinary metaphors are available). Noma (a portmanteau of the Danish words “Nordisk” (Nordic) and “Mad” (food)), was founded in 2003 by René Redzepi and has been at the heart of the well-documented boom in all things Scandinavian: Scandimania. The focus of the cooking and the style of the restaurant is not only a celebration of modern Scandinavian ingredients and food, but also seeks to encapsulate the Scandinavian weltanschauung, a fusion of creativity, design, sustainability, cleanliness and style).

The building itself is set in an old warehouse that has a semi-industrial, semi-shabby chic farmhouse feel and is set out on the waterfront by the harbor that characterises this part of Copenhagen. As we walked to the front door we were greeted by a welcoming party featuring pretty much all of the serving staff. There were a LOT of them, but they were all incredibly friendly, welcoming and enthusiastic. As we were being shown to our table we could hear the sounds of a motivational speech being given to the kitchen staff and resoundingly positive cheers in response. You really did immediately get the feeling that everyone here was part of a team at Noma.

The tasting menu, which everyone has to take, is comprised of 20 courses; the courses seek to showcase unusual, often locally-sourced, ingredients. For sake of brevity I won’t detail every course that we ate; instead I will focus on what were, for me, the highlights and the dishes that left the greatest impression on me.

The first eight courses or so are tapas in style, they are small bites that come at you in rapid succession, but are beautifully presented. Each time a dish arrives at the table the waiter/waitress, or sometimes one of the chefs, takes you through what ingredients have been used to make this dish and how it has been cooked.

Particularly memorable in the tapas courses were; Reindeer Moss flavoured with Ceps, the moss had a really interesting crunch to it with a smokiness and depth coming in from the ceps; the Beef Tartar and Ants, featuring local, deliciously-succulent raw beef and ants which were sourced from a local forest (the ants had a slightly sharp, acidic flavour to them, as well as a real crunch which contrasted the texture of the beef nicely); the Smoked and Pickled Quail’s Egg, which was presented still smoking on a bed of hay and we were instructed to eat in one bite; Æbleskiver (a traditional Danish pancake served in a sphere) and greens, which was deliciously light and fluffy inside with a nice iron tartness from the greens that it concealed within. 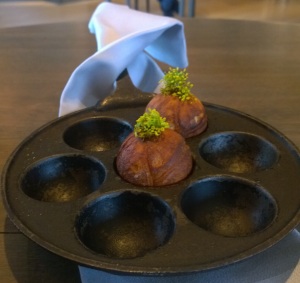 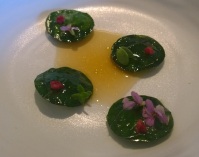 Shrimp and Nasturtium with Radish and Yeast

At this point we were given a slight break and the pace of the serving slackened a little. We still weren’t given any “main courses” as such, but had six further dishes presented to us. The first of these was Squid and Broccoli served with a sauce of Fennel and Blackcurrant Leaves; the squid was served raw and to preserve its freshness was presented in a bowl made of ice. Next up was Shrimp and Nasturtium served with Radish and Yeast, which was a particularly pleasingly presented *alliteration klaxon* dish with the shrimp ensconced in parcels of Nasturtium (a form of watercress with a distinct peppery taste to it) and topped with some beautiful, and rather tasty, foraged wild flowers. 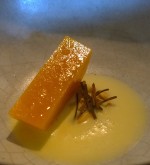 Pumpkin with Kelp and Beechnuts

The third dish was Pumpkin served with Kelp and Beechnuts. The sauce had a really deep, rich flavour to it and the contrast between the sweet, soft-textured pumpkin and the nutty, coarse-textured beechnut was particularly noteworthy. We were then presented with Beetroot served with Sloe Berries and Aromatic Herbs; the beetroot had simultaneously a wonderfully, earthy flavour and a tart, tangy note to it.

The fifth and sixth dishes in this section were probably two of my favourite courses of the whole menu. Firstly we had Egg Yolk served with Potato and Elderflower; the rich, luxurious yolk had been gently poached and was surrounded by baby potatoes that had a real crunch to them. The sauce made from elderflower brought the two other textures together nicely. Next up was Roasted Bone Marrow served with Cabbage and Nasturtium Flowers; the slow roasted bone marrow was juicy and delicious and actually  served in a bone for visual effect. The Nasturtium flowers added a vibrancy to the plate but were also a very interesting flavour; full of iron and slightly bitter. 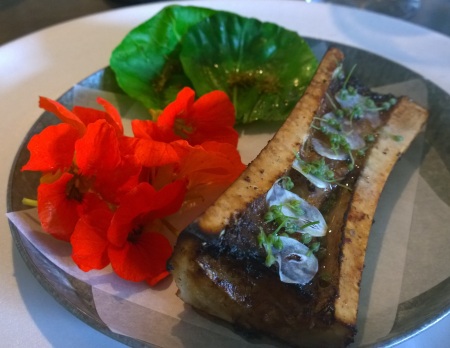 At this point in the proceedings we had a further interlude before moving onto the first of two dessert courses; Aronia Berries and Söl. Aronia Berries are a berry known for their extreme tartness, which really did come through in this dish. The second of the two dishes was particularly interesting; entitled Potato and Plum it had three layers to it – one of sweet potato, one of plum itself and one made from the kernels of the plums. Put together it tasted almost exactly like a plum frangipane, with the nutty/almondy flavour coming through from the plum kernels. After the dessert courses were completed we were presented with a couple of after-puddings, including a rather delectable cinnamon Danish; because we hadn’t quite eaten enough by this point…! 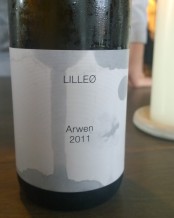 A word or two on the drinks side of things. As you would no doubt expect, I went for the wine pairing with the menu and had a number of very interesting wines. My highlights were a lovely and clean 2012 Bruck Riesling from Veyder Malberg (Spitz, Wachau), a surprisingly flavoursome NV Nature Cremant from Phillip Tessier (Cheverny, Loire) and an unexpected Danish wine, the 2012 Arwen from Lilleø Vin (Sydhavsøerne, Denmark) which was a blend of Solaris, Sauvignon Blanc, Riesling and Silvaner and is named after René Redzepi’s daughter.

A number of the wines proffered on the tasting menu were biodynamic or natural wines. The use of biodynamic and natural wines did fit in with the restaurant’s ethos regarding environmentalism and sustainability. I have said previously that I have not had many wines from these schools of wine-making that I have really enjoyed and this is still the case. I can see why they were all paired as they were and the sommelier had done a very good job matching some particularly unusual flavour combinations to the wines. Overall, I would say that I was a little underwhelmed by the matching wines.

What was, however, very impressive is that Noma did offer an alternative to the wine tasting menu – a juice tasting menu, which my wife took. These juices were specifically made to compliment the food courses that we were tasting and were very well thought out. As an example, one of the juices that we were presented with was a combination of green apple and Douglas Fir pine. As you smelt the juice it gave you the sensation of walking through a beautiful, Scandinavian pine forest; it was so powerful and aromatic that I just had to keep on smelling it. When you drank it however, you got a beautifully crisp taste of tart green apples. As you’d expect there were some slightly more unusual combinations in there too; Nasturtium made an appearance once more, as did Lingonberry. This was a very clever addition to the menu, my wife doesn’t often take the accompanying wine flights as they tend to be a bit much for her; the option to have something non-alcoholic, yet well crafted and thought-out, to accompany the food was most welcome.

After the meal we were asked if we wanted to take a tour of the kitchens; I bet you can imagine how excited I was at the prospect of this! The set-up was very impressive with experimental kitchens, where they develop the new dishers that will make their way onto the menu one day, preparation kitchens, plating up areas and private dining rooms. In one of the main kitchens I was even able to get a photo with the kitchen staff! We finished up our four hour gastronomic experience sitting in their bar and trying a couple of their aqua vitae. 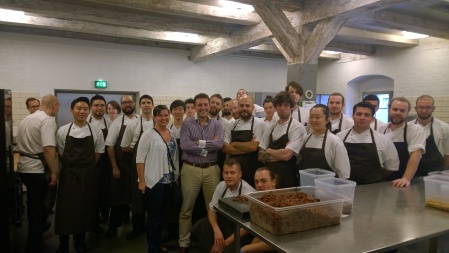 So, what did I make of our trip to the “best restaurant in the world”? It was an interesting, exciting and impressive menu and dining experience. The staff were fantastic throughout, knowledgeable and enthusiastic, willing to engage and answer all of my questions (and there were a lot of them). The menu really did seem to encapsulate a lot of what lies at the heart of Scandimania, beautifully-crafted, well designed, sustainably-focused, local produce. The number of courses meant that we could try a huge variety of dishes, ingredients and cooking techniques; however it did mean that we left thinking that we hadn’t really had a “main course” – this isn’t necessarily a bad thing, it’s just different from most other meals that you have.

I’m certainly glad that we went to Noma, it is an adventure from beginning to end, and I am exceedingly thankful to my wonderful wife for taking me.

So; where to next year??