First of all, apologies that I haven’t written much in the last month or so. I’ve started a new day job, which is keeping me very busy and has meant that I haven’t had a lot of spare time for blogging. I’ve also not been able to follow the WordPress blogs that I so enjoy following. Hopefully things will all calm down soon.

Onwards and upwards however…

Unfortunately, this restaurant review is not going to be a positive one. I suppose it had to happen eventually; I visit so many restaurants that every now and again one is bound to have an underwhelming, or just frankly disappointing, experience. What makes matter worse here, however, is that I should have known better. A couple of years ago I went through a phase of ordering lots of restaurant deals from Groupon and other such websites. After a few decidedly mediocre experiences, I concluded that, by and large, these deals didn’t really represent value for money. Often portion sizes were whittled down, the selection that one had was rather limited, or the establishment in question was so busy as a result of their promotion that the service was lacklustre. As a result of these experiences, I decided to avoid such deals. However, when recently I saw an offer for a Game platter from Crazy Bear hotel in Beaconsfield I persuaded myself that it was worth chancing my arm once more. I did this for a number of reasons; firstly, I had wanted to visit Crazy Bear for a while, its reputation for exuberance and theatricality is well known; secondly, having just passed the Glorious Twelfth, I really fancied eating some Game. 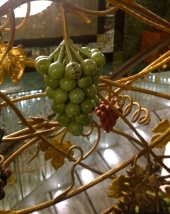 With this in mind we headed to Beaconsfield (just to the north-west of London) and headed to Crazy Bear. We were greeted by the staff and seated in the bar area, which was unlike anything that I had ever seen. I can only liken it to a decorating project which was the result of a joint venture between a champagne-sozzled interior designer and a footballer’s wife. It was completely over-the-top and, frankly, bordering on vulgar. There were outrageous chandeliers and faux French-chic tables and chairs. Even the staircase to the toilets was adorned with rather large vines and bunches of grapes. We were somewhat overwhelmed by the extravagances of the bar and found them somewhat comical. In the bar, I had a Goji Martini (Tanqueray Gin, Goji Berry Liquer and Lemon Sorbet), which I was pretty disappointed with, finding it overly sweet. 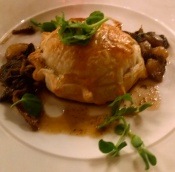 We were led in the dining room, which was similarly opulent. We were here for the Game and I was keen to get going. I ordered as a starter a Quail and Foie Gras Butter Pastry Pie served with Braised Savoy Cabbage and Sauce Perigord. The pie when it emerged was to my mind far too large for a starter. The pastry was nice enough, rather buttery and not at all soggy. The quail was nicely cooked, but there was barely any Foie Gras, which was tremendously disappointing.

For the main course, my wife and I shared a Roasted Brace of Pheasant, basted with Rosemary and Thyme Oil, Game Chips, Pigs in Blankets, Cardamom Bread Sauce and Roasting Juices. It came with Duck Fat Roasted Maris Piper Potatoes and Sautéed Savoy Cabbage with Chilli Butter. When the platter arrived we gasped at the size of it. We had essentially a Pheasant each with two breasts and two legs for us each, plus a couple of Pigs in Blankets. Coupled with that were the generous portions of side dishes and the net result was far too much food. What really let this dish down, however, was that the Pheasant was over-cooked; it was rather tough and pretty chewy, making the whole experience of eating it somewhat of a chore. I couldn’t shake the feeling that in putting this grand platter together, they focussed on quantity and scrimped on quality. I would have been much happier with a dish half the size, but cooked better. The same could be said for the two side dishes that we got, the potatoes were not particularly nice (I cook much better roasties than that!) and the savoy cabbage was a little flavourless and textureless. All-in-all this was very underwhelming.

We accompanied our food with a 2012 David Reynaud Crozes Hermitage. Medium ruby in the glass, it had a red fruit driven aroma (strawberry/red cherry compote). There was a little vanilla and coconut on the nose too, with a touch of smoke and black pepper too. On the palate the wine had medium acidity and low tannins, with bright red fruit flavours coming through strongly. The finish was decent in length and overall it was a satisfying bottle of wine. 7.5/10.

The menu that we were having finished with a Crazy Bear Baked Bombe Alaska, which was flamed at the table with some Raspberry Eau de Vie. You cannot deny the theatre of this dish. The pudding was carried with some ceremony to the table and then the Eau de Vie was lit and poured over the knife which was then used to carve the pudding. The result was visually very impressive, but as the flames died down you were left looking at a simply massive Baked Alaska – and we were already stuffed at this point! We started to eat the Alaska and probably only had about a quarter of the pudding before giving up. It was sickly sweet and not particularly pleasant.

To make matters worse for this dining experience we found ourselves sat on a table next to an absolute burke; clearly half-cut he saw us discussing wine with the sommelier and then exclaimed that surely “wine is something you just drink to get drunk and not something worth particularly caring about”. Honestly. To make matters worse, on discovering that my wife was German he could barely conceal his ignorant and frankly racist views. I can hardly hold this idiot against the restaurant, but it certainly didn’t do anything to improve our impressions of the meal.

Overall the theme throughout the meal was substance over style, “all fur coat and no knickers”. There was such emphasis on outward appearance and theatricality, and it was completely at the expense of quality or attention to detail. I’m sure there are people who would quite happily eat over-large, bland food served with a dash of drama; but that is not my idea of fun.

I really hope my next dining experience will be more positive…