In my first post I described some of the culinary delights that I discovered in Hanoi. After Hanoi we moved to Sapa in the north where we were to do three days of trekking. We had some spectacular views across stunning scenery (see photo below), but unfortunately these were all too often spoilt by some pretty rotten weather, which actually made for some rather dangerous trekking conditions; somehow, we managed to get through this without any serious injury.

Food was not the highlight of this stretch of our the trip as it was very basic (and made me quite sick, actually!) but we did get to spend three days with some remarkable women – the Sapa Sisters, who are a co-operative made of local women from the indigenous Hmong tribe. Our particular guide, Lang, was phenomenal; while we were struggling up and down the hills, she was gliding along effortlessly whilst readying local hemp to be made into clothing (I kid you not). We had many interesting discussions with her and her sisters; it was truly fascinating, and often frankly astonishing, to learn about the Hmong people and their cultural practices. This is what travelling is all about for me, using the opportunity to meet with people with a completely different frame of reference and concept of the world than yours and using that opportunity to question what really is important in life. If you are visiting Sapa, I highly recommend getting in contact with the Sapa Sisters.

After our time in Sapa we headed to Hue in the middle of the country hoping for better weather. We were not to find it. What we were to find, however, was some rather delectable food.

This restaurant is rather famous in Hue after it was featured in a TV programme. It is run by a family of deaf-mutes who communicate with you in international sign-language (cue lots of pointing at menus, and making “mmmm… that was delicious” faces). The front man of the restaurant is a rather charismatic devil who buzzes around the institution keeping an eye on how all the customers are getting on, whilst simultaneously canvassing passers-by to come in and playing a hand of cards with his pals. It’s quite a sight to behold.

The trademark of the venue is a rather rudimentary bottle-opener which he flourishes with great aplomb. We were then pleased to be presented with one of our own (see photo to the left), before being shown three albums of photos from people who had taken their opener and taken a picture of them in front of some international monument (Big Ben, Brandenburg Gate, etc) and then sending him a copy – he was clearly very proud of this collection of photos and I have promised myself that we will add to it.

The food in the restaurant was very nice indeed. The highlight for me was a local Hue speciality; Bánh Khoai which is like a Vietnamese crepe, a rice pancake which is cooked in oil – ours was stuffed with chicken and shrimps and served with some beansprouts, lettuce and some green papaya. The secret ingredient to this mix was the sweet satay-style peanut dipping sauce that came with this dish, which really added a nice extra dimension. This made for a great lunch while we were hoping for the rain to clear….

The next day we took a city tour around Hue, which was the capital of Vietnam between 1802 and 1945 and as such contains some incredible ancient monuments and a wonderful historical centre. Unfortunately like a lot of Vietnam, recent history has meant that a large number of these buildings were destroyed – however they are slowly restoring these through the money contributed by visiting tourists.

Half way through the tour we stopped off at a restaurant around the corner from our hotel. As soon as we walked in I knew we were on to a winner as there were several large groups of locals already excitedly being served. We were presented with a five course menu which featured a number of courses that we were familiar with; some more Bánh Khoai (see above), plus some more fried Nem (Vietnamese Spring Rolls, see last post), but we also had another couple of dishes that really stood out.

The first of these was Nem Lui, another Hue speciality. These are minced pork which is moulded around some lemongrass skewers. These are then grilled for a few minutes and then served with a selection of salad, vegetables and the Hue sweet-peanut sauce. These were really juicy and flavoursome, with a little hint of spice to them as well. Worked really well. 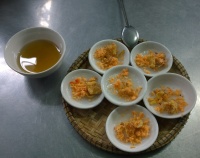 The other dish that we particularly liked were Bánh bèo, which are little rice cakes that come in small ramekins with a variety of toppings. Ours had dried shrimp and a little prawn parcel on. The impressive thing about this dish is that you get the rice mixture in your ramekin and you then add some moisture to them and they solidify in front of you. After a few seconds you can slide your spoon underneath and then lift the whole thing into your mouth. A little bit of theatre on your plate! This dish is supposedly the most famous from Hue and is thought to represent the imperial cuisine of Hue when it was the nation’s capital.

We may not have lucked out with the weather in Hue, but I was certainly impressed with the food.

On my next blog, I will cover the next part of our trip where we go on to Hoi An – surely we can’t keep having bad weather… can we??