Did you know? You can subscribe to my blog by clicking on the “follow blog by email” section at the bottom of this post. This will allow you to get an email notification every time I post!

One of the things that I look for in places that I eat is a sense of authenticity. You want the feeling that the dishes that you are eating are a true reflection of the cuisine that the restaurant is claiming to represent, be that English, Italian, Mexican or Eritrean. I had long had a place on my “List” that I had wanted to try out, Casse-Croûte on Bermondsey Street. It had a particularly quaint facade that seemed to reassure me of its genuineness; mottled-grey, understated signage with traditional black windows and net curtains – it looked like it had been teleported from Monmartre and plonked in South-East London. 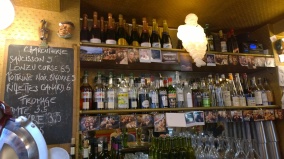 I ‘phoned ahead to enquire of a table, a voice answered “Bonjour?”- a good start in the search of authenticity, I thought. I was told that I could only secure a space for two at the bar, which sounded swell to me. On entering the petite restaurant I was immediately struck by its quaint charm, French memorabilia festooned the walls; cartoons, paintings and vintage French advertising. The menu was not to be found on a piece of paper, but instead on a chalkboard at the end of the bar (in French of course!); this allowed the waiting staff to update as various items sold out. 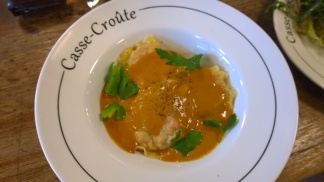 I was (fortunately) able to secure the last portion of Lobster Ravioli (ravioles de homard) for my starter and I was very glad that I was able to when I was presented with a shallow bowl with three generously sized ravioli, smothered in a wonderfully rich sauce. The sauce had a  real depth to it which suggested that it had been cooked down from the lobster shells. I particularly liked the fact that they weren’t stingy with the sauce, it was really needed  as it meant that in every mouthful you got a decent covering. The raviloi themselves were lovely, nice and light pasta, filled with lots of juicy, slightly sweet lobster meat. An excellent start to the meal!

For the main course I knew what I was having from the moment that I saw it on the menu – Beef Wellington (or “Boeuf en croûte“). I have got myself involved in a January detox diet, which sees me eating rather healthily and often vegentarian, so I was very excited to get involved with a big hunk of beef! When the dish came out it looked so simple and so elegant – a neat slab of beautifully cooked beef served with a mushroom duxelles, encased in lovely pastry and served with green beans and a nice, deep, meaty gravy. What more could you want?! If I was being picky, I would say that I could have eaten a bit more of this, mostly because it was so good.

To go with the main, I picked out a bottle of wine that I knew would be interesting and exciting – a 2014 F. Delalande, Le Haut des Vignes (Chinon, Loire Valley). I have been getting very excited by Cabernet Franc recently and this bottle was no exception. The charm of Cab Franc is its brightness, which is a perfect foil for nice, juicy meat. It also tends to have a rather wonderful herbaceous, menthol-like quality to it that balances out some of the sweet notes. You can really see why they like adding it to Right Bank Bordeaux, it provides that little bit of bite and edge to mellow out that juicy Merlot. This wine was all of that personified – fresh and bright with enough backbone to balance out some rather decadent French cuisine.

As this was a lunch and I needed to do things later on we opted for an espresso rather than a pudding or some cheese (although I was sorely tempted by the latter!). In my search for authenticity I must say that Casse-Croûte is just perfect – I thoroughly enjoyed my meal there and will be returning post-haste!

Reminder: you can find a compendium of all my restaurant reviews by following this link to my reviews archive.