Earlier this month my wife and I found ourselves celebrating our five-year wedding anniversary. In that wonderfully-bizarre property that time has, five years both simultaneously feels like it has taken five minutes and five decades. We have done a tremendous amount in those five years; travelled to some incredible places, eaten in some of the best (and THE BEST) restaurants in the world, drunk some phenomenal wine and been lucky enough to see our family grow as siblings and cousins have married and nature has taken its course. I feel very lucky to have had someone wonderful by my side for all of these adventures; someone who acts as a perfect counterpoint to me – encouraging me to do things to better myself and tempering my naturally exuberant side when I (occasionally) need reigning in. 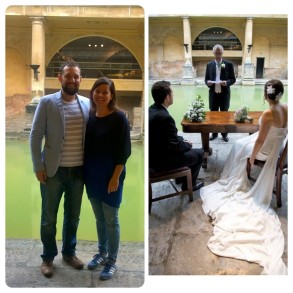 They say never to return to the scene of the crime..

So, how to commemorate such an auspicious occasion? Simple, really: travel back to where it all started and take a trip down memory lane, whilst creating some brand new memories. Five years ago we got married in the breath-takingly beautiful city of Bath, in Somerset, so we decided to return to the scene of the crime! In three days we managed to visit everywhere that we spent time during our wedding weekend. We had: a sneaky half hour in The Roman Baths before it opened (where we had our wedding ceremony), afternoon tea at the Pump Rooms (where we had our wedding breakfast); we bought cheese for supper from the same cheese shop that we bought our wedding cheese-cake and we even stayed at the same apartment that we spent our first night together as husband and wife! We even managed to do something that we didn’t do last time, which was take a trip to the eponymous baths that made Bath famous with the Romans. 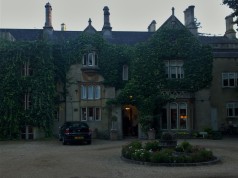 When it came to celebrating the big night itself we decided that we would try out one of Bath’s fancier locations – The Bath Priory (holder of one Michelin star at the time of writing); situated, as might be expected, in a rather attractive grand, old Priory building, built with the typical Bath stone and bedecked with ivy. Inside the ceilings are low, but the décor is tasteful and gives a very sophisticated feel. We were shown to a table by a window, which allowed us to survey the comings and goings in the room (which would prove interesting later on).

We opted for the Tasting Menu and I was hoping for the accompanying wine flight, but was told that the sommelier couldn’t do this as she was on her own this evening – which was rather disappointing, especially as we weren’t told about it until I tried to order it! Nonetheless, she helped us pick a half bottle of white and red and we got going.

As this was a celebration we started with a glass of the Ruinart Blanc des Blancs (NV), which is one of my favourite champagne houses. It was bright and lemon fresh on the nose, with a zesty and zingy taste which, after a while, developed a slightly biscuity nose to accompany all of the fruit. A lovely aperitif!

Our first course was a Pea Soup with Crème Fraiche and Hazelnuts. The “pea soup” was actually a vivid-green pea velouté with incredible richness coming through from the generous shavings of truffle on top, added to by the crème fraiche. I thought that the toasty hazelnuts gave a really nice depth and texture contrast to the dish, while the garnish of pea shoots gave it a slightly peppery note. I thought that this was an excellent dish and one that really whetted the appetite.

For our second starter we had Raw scallop served with Tomato and Horseradish. In truth I found this dish a little muddled, the thin slices of raw scallop were nice but were served with a slightly odd jellied tomato and then the dish was coated with a more than generous grating of fresh horseradish. Texturally the whole dish was a little off for my liking and I wasn’t sure that the flavours particularly complimented each other. A swing and a miss, I’m afraid.

To go with our starters we had a 2015 Leduc Viognier (Pays D’Oc, France), which was nice and perky on the nose. The dominant flavours were stone fruit (peach and apricot), you also got faint hints of white pepper and a touch of grass coming through. On the palate it was green apple, but a riper and juicier specimen, perhaps a late-summer apple readying itself to fall. The wine had decent acidity and nice balance, but I was surprised at how persistent the finish was – pleasingly long.

Mains (and a controversy!)

For our game course we were served Woolley Park Farm Quail with Bacon, Wiltshire Truffle and a Quail Consommé. I very much enjoyed this dish, however my wife found the claw of the bird standing proud atop the dish a little off-putting. The consommé was clear, bright and deep with a beautiful smoky and rich flavour – it reminded me of a pack of streaky bacon crisps (in a good way). The meat was nicely pink, whilst cooked through. All in all this was very good.

Now for the CONTROVERSY! Next up on the menu was a Truffle Butter Poached Turbot served with Braised Onions, Broccoli and a White Wine Sauce. Sounds divine right? Imagine my surprise when we were presented with a plate of Sea Trout. Now, Sea Trout is a nice fish in its own right, but it is no Turbot. My wife and I looked at each other perplexed – was this an extra course? I checked my ‘phone photos (this is one of those situations where obsessively photographing everything is very useful), definitely no mention of Sea Trout. I called over the waiter and enquired as to why we hadn’t been given Turbot; I was told that they had run low and so the chef had switched the course to Sea Trout. I think at this point they hoped that I would accept that and eat the ersatz dish; trouble is that I really wanted Turbot – and they hadn’t told us of this when we ordered. 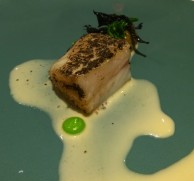 To cut a long story short, the Sea Trout was withdrawn from our table and they found some Turbot for us to have; we then watched as they belatedly told the other guests (who I don’t think were as bothered as me) that they were to be getting Sea Trout and not Turbot. Was it worth making a fuss over? In short, yes; the dish was delicious with the Turbot playing the role of the star that it is. If I had been told when we ordered, I could have accepted it, but it is not right to simply bring another dish from that which was ordered without explanation.

After all that excitement, I was really pleased to see the arrival of our last main course – Devon Red Beef, with Shallot, Celeriac and a Red Wine Jus. This was probably my favourite course of the evening, the beef was just delightfully cooked – beautifully pink in the middle but nicely caramalised around the edges where it had been finished off in the pan. The shallots were nice and sweet too, whilst the jus was deep and rich. Not groundbreaking cooking, but a thoroughly, thoroughly enjoyable plate of food.

For the red wine we chose an Amarone (I unfortunately failed to capture its name) which on the nose was heady and voluptuous with raisin and fig notes accompanied by sweet spice aromas (clove and nutmeg). On the palate it was weighty and profound with remarkably low levels of tannins evident, giving it a beautifully smooth profile. The taste was like a warm compote of red and black berries. A really great match with the beef.

For our pre-dessert we had Whipped Brie with Mushrooms on Toast, which I must say that I didn’t particularly enjoy as I found it a little too salty.

However, the proper dessert was a Bramley Apple Soufflé with Salted Toffee Ice Cream and was properly delicious. There’s something wonderfully showy and decadent about a soufflé, the way that it nestles proudly, even arrogantly, above the ramekin that it sits in. The combination of flavours was spot on, the rich, fruity Bramley Apple compote in the heart of the soufflé was perfectly matched against the ice cream with its creaminess and the saltiness from the salted toffee. This was really good. A nice end to the dinner.

I treated myself to a well-earned (!) glass of 2012 Chateau Delmond Sauternes with this pudding, which although paled into insignificance compared to my recent ’98 Y’quem, was a perfectly pleasant wine with nice marmalade and passion fruit notes.

So, as you can probably guess this was somewhat of a mixed bag of a meal. There were some truly excellent courses that really did show that the restaurant and kitchen knew what they were doing, but there were some slightly odd courses and a couple of issues to do with the service that really tarred the overall experience. The challenge with something like this is that you can never be sure as to whether they were just having a bad day or whether this was representative. Given that this was not exactly a cheap meal I can’t see myself returning to try it out again to see.

Still, as discussed above; what is more important than anything was that I was able to enjoy the highs and lows of this meal with my beautiful wife; and in the end, that’s all that matters.

Reminder: you can find all of my past reviews by following this link.

One thought on “The Bath Priory”

I’ve recently been getting into cognac in a big way (see link in my bio for a blog on this). . I recently treated myself to some @riedeluk tulip cognac glasses (which I am VERY happy with!) and a lovely bottle of H by Hine VSOP from @hinecognacs. This is very much the good life...!
Free wine!!! Well not exactly. Over the last few months used the Vault function on my @revolutapp bank card to round up all purchases that I make, with them putting these pennies into a separate account as a form of savings. I recently got to enough money in my vault to treat myself to a case of 2006 @lopezdeherediaoficial Vina Tondonia Reserva, probably one of Spain’s most famous white wines. I don’t often get to buy cases of wine as I want to try as many different wines as I can so tend to focus on purchasing variety over quantity. However, I’m really looking forward to seeing how this wine shapes up over the next few years!
A rather stellar line-up of wines to see in the New Year (and new decade). . We started with a @bodegastradicion 30yo VORS Palo Cortado, which was a sublime accompaniment to some tapas - inspired by my sister-in-law who was visiting from Andalusia. . For the main we had a 1975 Leoville-Barton, which I was incredibly excited about. It didn’t quite live up to my expectations, but it was certainly a memorable wine that went beautifully with our Beef Wellington. . To see in the New Year we opened a 2015 @juveycamps Brut Nature Reserva da Familia. JyC is an absolute favourite of mine, having visited them a couple of years ago - this did not disappoint, it had a softened a little and was an extremely enjoyable drink. . I hope that you also had something delicious over the last few days to commemorate the passing of time!