I have been fortunate to have visited some incredible restaurants for my birthday. In fact, the roll of honour of birthday meals is quite something to behold: The Fat Duck, Noma, Enoteca Pinchiorri. So for this year’s birthday meal, my wife knew that the stakes were high. She told me that she had booked a table at Shaun Rankin’s restaurant in Fleming’s hotel in Mayfair and I was intrigued. I’d heard very good things about this restaurant, so I was very keen to check it out.

The hotel is everything that you would want from a Mayfair establishment. It oozes refinement and style, in a quintessentially old-English style. Not glitzy or lavish, under-stated yet defiantly confident in its ability to meet the most discerning of clientele. As you walk through the lobby you descend into the Lower Ground floor where the restaurant is situated, past a rather splendid chandelier. The dining room itself is set out in a delightfully art-deco manner with classy oak-panelling, offset against hypnotic geometric designs on the floor. It felt simultaneously a little nostalgic, harking back to a more elegant time; whilst also being effortlessly modern and current. As we perused the menu we had a glass of Nyetimber Classic Cuvée (ex-magnum), whilst chatting with our gregarious host for the evening – a charming Polish waitress who trod that fantastic line between being an interesting character, who engaged with us; whilst not over-shadowing our experience. We opted for their seven-course Tasting Menu, along with their extremely interesting accompanying wine flight – an all-sparkling wine flight!!

Out menu commenced with Heritage Beets, Goats’ Cheese, Kalamata Sorbet and Truffle Honey. As the plate was set down I was immediately impressed, I thought this looked an extremely attractive plate. There were three different kinds of beetroots on display here: red, golden and purple, which gave the dish a tremendous brightness. What I was most impressed with, however, was the Kalamata sorbet – who would have thought of an olive ice cream?? It had a fantastic flavour profile, that really did give you a smack around the face of olive, but it was a great match for the tangy, slightly sweet beetroots and the rich, creamy goats’ cheese. All of this was then brought together and taken to a new level with the truffle honey which added a beautiful smattering of decadence and sophistication. This was a fantastic start to the menu, I knew we were going to be in for a great experience. With this dish we had the first of our matching sparkling wines, a NV Ice Cuvée Peller Estate (Ontario, Canada). The grape for this wine is Vidal and it features a little dosage of Ice Wine which gives it a little sweetness. On the nose it was rather exotic, invoking aromas of passion fruit. On the palate it was off-dry with a juicy fruitiness and slight floral profile. Interestingly when matched with the food it didn’t seem so sweet, which worked really well together. A fantastic match.

Next up was Tuna Sashimi, Scallop Ceviche, Bloody Mary Jelly, Avocado, Cucumber, Wasabi. A pleasing plate, if a little less-exuberant than the last. The tuna was absolutely sublime, huge flavour and just a really pleasant experience to eat. The little morsels around the edge contributed nice textures to the dish. I thought that the Bloody Mary gel could have packed a little more heat in order to replicate a fiery wasabi sauce. The cucumber sorbet once more showed a playfully, inventive side to the dish, it also gave it a lovely freshness. The wine match for this course was beyond clever, a knowing nod to the Japanese flavours and character of this dish with a sparkling Sake: “Awasaki Sparkling” from Fukuju (Hyogo, Japan). I haven’t tried much sake and I think this is only my second sparkling. It looked a little cloudy in the glass and had an interestingly funky nose. On the mouth it had a slight petillance to it. The sommelier explained that the aim was to replicate the umami profile of the dish with the wine. I noted that it seemed to be somewhere between a Hendricks and Tonic and a sparkling Elderflower drink. All-in-all an interesting and very clever match. 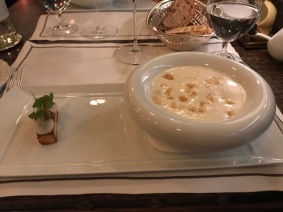 We continued our gastronomic journey with a Jerusalem Artichoke Velouté, Artichoke Toffee, Homemade Brioche. This was absolutely stunning. Divine, even. The picture doesn’t really do this dish justice – this one wasn’t about clever plating or unusual flavour combinations – it was all about heavenly flavours of wonderful ingredients. The soup of Jerusalem Artichokes was rich, creamy, silky and flavoursome. Underneath it there were some Trompete mushrooms that had been cooked down and the whole dish had had a generous drizzle of truffle oil which added to the decadence. This was one of those dishes that I found myself slowing down towards the end of it, in order to prolong the eating experience. The little brioche on the side was nice, but the real star was the soup. This was served with a 2012 Extra Brut “Colet Navazos” (Penedes, Spain), which can’t be called a Cava as it has a little dosage of Olorosso in it. This wine fell a little short for me, as an Extra Brut it had great acidity, with a little nuttiness from the Olorosso, but I felt it clashed a little with the richness and luxuriousness of the soup; I would have gone with a vintage Champagne with this dish – something with a little more breadth.

Time to get back on the meat with: Roast Rabbit, Pancetta, Truffle Gnocchi, Morels and Peas. Another attractive looking dish, the rabbit had been treated with a great deal of respect with loin wrapped in pancetta, plus leg meat. I liked the coco beans in the dish, which seemed to give a nice, firm crunch to the dish. For me, though, one of the stars was the little gnocchi which had been nicely browned off, but with that wonderful truffle flavour (a recurring theme in this meal!), which was augmented by further slices of black truffle shaved on top of the dish. To match with this course, we were served a 2013 Gusbourne Rosé (Kent, England); English Sparkling Wine is enjoying somewhat of a boom right now having beaten all of the French prestige labels at a recent blind tasting (the “Judgement of London”…). This wine was made from the traditional blend of Champagne grapes, but was Pinot Noir led. On the nose it had already developed a nice bready nose, with lively strawberry notes. On the mouth it was light and delicate, an extremely elegant wine. You can see why people are so excited about English Sparkling Wine with crackers like this (that retail for under £40/bottle). 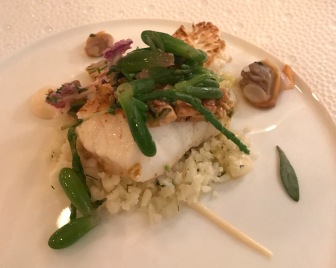 If you asked me for a heavenly food/wine combination then Turbot and Champagne would have to be right up there – which is fortunate as that’s exactly what we had next! Turbot, Pinenut Crust, Cauliflower, Cockles, Sea Vegetables. Turbot is the king of fish and here it was given a suitably regal plating. The Turbot had a nice nut crust on it, giving it a little crunch as a contrast to the delicate meat of the fish. Cauliflower also seems to be enjoying somewhat of a renaissance at the moment and here we had it showcased in various different textures: as cous-cous, as chargrilled florets. There was a nod to the sea with the samphire, which gave a little saltiness to the whole plate. As mentioned before, we were given a glass of NV Cuvée D. Devaux, Côte des Bar (Champagne, France) to match with this course. Another Pinot Noir-led blend; the nose had a nuttiness to it, but also featured some nice stone-fruit elements (peaches, apricots). On tasting, the wine had a nice breadth to it, with ripe pears being the dominant flavours. 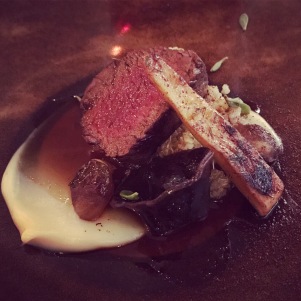 Where do you go after Turbot? Well, Venison of course! Scottish Venison, Medjool Date, Chocolate Tortellini, Quinoa, Parsnip, Ginger. This dish wasn’t holding back! The venison had been roasted to maximise the flavours and looked absolutely spectacular on the dark plate. Chocolate is a traditional match for venison and the chocolate tortellini was absolutely sublime, it had a dark, bitter flavour profile that went brilliantly with the venison. This was further augmented by the sweet balls of Medjool dates. Just fantastic cooking and flavour combinations. I did wonder where on earth they could go with a sparkling wine match for this course, perhaps they would cheat and go with a still wine? Not a bit of it, they pulled a 2009 Sparkling Shiraz, Majella (Coonawarra, Australia). Extremely clever. The nose featured ripe strawberry and cherry notes with a little smattering of menthol to accompany it. On the mouth it had a juicy cherry profile, that featured a little sweetness, which was needed to stand up against the rich flavours on the plate. Yum!

Time for the sweet stuff! Coconut Mousse, Roast Pineapple, White Chocolate, Malibu, Mango. Once more we got to enjoy a chef showing off some incredible skills with this dish. The dish arrived with a brown cube that looked like a square fondant, but once you cut into it, it fell apart to reveal it was a cube of coconut mousse that had been painted to look brown on the outside (like a coconut – get it??!) and it oozed all over the plate with delicious coconut and pineapple flavours – a wonderful take on a Pina Colada. The Malibu flavours were contained in the ice cream, which gave a nice little boozy note to the dish. This was one of those dishes that you have to eat with a smile on your face. Clever, inventive cooking that gives a dish that tastes fantastic. What more could you want? Time for the last wine of the evening and they saved something special for this, a 1991 “Réserve”, Weinhaus Peter Lauer, (Mosel, Germany). Being 26 years old, it had a nice amber colour in the glass. Despite being a Riesling, it had developed a really bready, yeasty aroma. On tasting it was broad and rich with a bright citrus-fruit profile. The acidity was astounding considering the age of the wine. I had expected it to be sweet, but it really wasn’t. The finish was very long and pronounced. In German I would say it was ausgeprägt (we did a class on wine descriptions in my German class recently, so I had to get one in…!).

Considering some of the restaurants on my birthday hall-of-fame it is no mean feat that I came out of this meal having had as enjoyable a dining experience as at some of the others. Shaun Rankin clearly has both a talent for flair and precision, which makes for a fantastic meal. The flavour combinations are interesting and exciting, the plating of the dishes is well conceived and the overall taste of these dishes is sublime. Special praise should also go to possibly the most interesting accompanying wine flight that I have experienced from the Head Sommelier, whose all-sparkling selection threw up some unexpected wines that worked really well alongside Rankin’s wonderful food.

Last word, of course, goes to my wife Isabelle, whom I must thank for a wonderful birthday treat. She continues to delight and amaze me with her generosity and thoughtfulness.