The word “institution” is perhaps overused when it comes to restaurants, but for some places it is absolutely appropriate. A case-in-point for this would be The Waterside Inn, which has held the highly coveted accolade of three Michelin stars continually for over 25 years, the longest continual run for any restaurant outside of France. The restaurant was founded by the legendary Roux brothers, Albert and Michel (senior), and it is their restaurant in Bray that helped put it on the culinary map. It now boasts a number of incredible restaurants, including Heston Blumenthal’s “Fat Duck” and the “Hind’s Head”.

Bray is in itself an idyllic little village, situated about an hour outside of London and boasting a quintessential English village vibe complete with spectacular views over the Thames, which wends its way through the village. As you would expect from its name, The Waterside Inn is one of the properties that you can find on the waterfront which means that after you have finished your meal you can take a digestif or a coffee on their terrace; but more of that later! 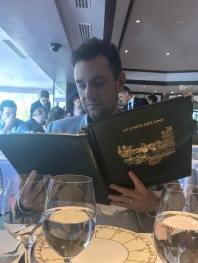 In my happy place…!

We arrived to the restaurant a little flustered as we had experienced some train difficulties on the way requiring us to ring up to push back our table by an hour, which the staff were very accommodating about. As we arrived we were brought into the dining room, which exuded a slightly old-world charm about it. There was no particular epoque that I would equate it to, rather a timeless-classic with some slight nods towards an Art Deco theme. Interestingly, the restaurant décor did remind me quite a lot of Michel Roux Junior’s Le Gavroche (which I visited a few years ago), it is clear to me now where he got his inspiration from! We were shown to our table and to get ourselves settled we ordered a glass of NV Ruinart Blanc de Blancs, one of my favourite champagnes; after all we were there to celebrate seven years of marriage and what better way to celebrate then with a glass of champers?!

We were eating from their three-course lunch menu, which commenced (after the usual amuse-bouches) with our starter of “Filet de Maquerau mariné au sel et grillé au chaulumeau, accompagné de concombre, ciboulette et feuilles d’huîtres végétales” (Cured and Charred Mackerel Fillet with Cucumber, Chive and Oyster Leaves). As you can see from the picture, the dish was presented absolutely beautifully, much as you would expect from a 3* restaurant. I particularly liked the use of the different shades of green both from the incredibly flavoursome mini-cucumbers and the leaves, but also the gels and sauces which gave really concentrated and intense flavours of cucumber and chive which gave the dish a real vibrancy. The mackerel fillet itself was perfection personified, light and delicate, a world away from the oily fish that you are sometimes presented with. I think the fact that it had been simply cured and then given a touch of the blowtorch to colour the skin and give it a little texture gave rise to the delicacy of the fish. Underneath it was a little bed of baby potatoes that were once more remarkable for what a pleasant flavour they had, which is a theme through every component of this dish, each ingredient was contributing a specific and excellent flavour to the overall dish and they all complemented each other very well indeed.

For the main course, I opted for a “Duo de porc “Blythburgh” purée de pommes de Terre fumée et pomme, jeunes carottes et jus” (Duet of Blythburgh Pork with a Smoked Potato Purée and Apple, Baby Carrots and Jus). This was another nice looking plate of food, even if it didn’t quite live up to the standards of the last course from an aesthetic perspective. The two pieces of pork were a nice contrast to each other, the darker piece was a slow-cooked portion of caramelised pork which had been infused with sweet and slightly spicy notes that reminded me of a hoi sin-like flavour. The other portion was an expertly judged piece of pork belly which had a nice piece of fat on top that melted in the mouth, along with a crunchy crackling-like top. The mashed potato was luxuriously creamy and absolutely divine, but I must say that I didn’t get as much of the smoked notes than I was hoping for, which was a bit of a shame; nonetheless the potatoes did possess a remarkably complex flavour profile. Once more this was a brilliant dish in its execution and style, but perhaps not quite as exceptional or showy as I had come to expect from absolutely top-class restaurants? 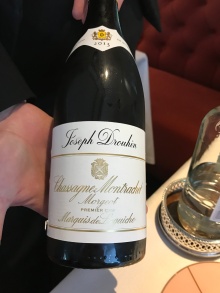 For the wine I was looking for something that would stand up to the rich and deep flavours of the pork, along with my wife’s dish which was an altogether lighter dish of pan-fried sea bream. To that end I wanted a white wine with a bit of body behind it, so I chose a 2013 Drouhin Chassagne-Montrachet Morgeot Premier Cru. The wine sat a rich, golden-yellow in the glass. I was excited to take a sniff of it and boy, when it did it blew my socks off! Epic buttery crumpet aromas, but accompanied and (importantly) balanced out with pretty and delicate floral notes of jasmine and honeysuckle. On tasting the wine had a refreshing acidity to it, which complemented its structure and body. There were bright tropical notes of pineapple and ripe melon, which were followed up by the purest of green apple flavours that carried the wine through for a long and glorious finish. Sublime! 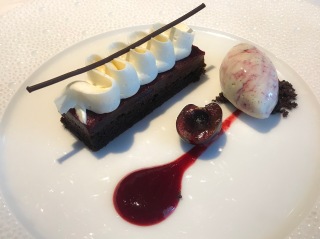 When it came to the dessert course, I decided to go for the “Entrements au Chocolat et cerises, crème mousseline vanillée, glace teintée à la cerise” (Chocolate and Cherry Dessert with Vanilla Mousseline Cream and Cherry Ripple Ice Cream). The dish was presented absolute beautifully, every element looked perfectly crafted and made for a very refined looking plate. The chocolate pudding was as you would expect, luxurious, decadent and very, very rich; just divine. The various forms of cherry on the dish were all carried off with absolute aplomb and showed a really good attention to detail; the layer of cherry jelly on top of the chocolate pudding, the cherry sauce, the poached cherry and then finally the beautiful cherry-ripple ice cream which was smooth and creamy. This was a top-class dish that was brilliantly put together. Cherries, chocolate and cream are an absolutely classic combination so there wasn’t a huge amount of innovation here, but what was shown was tremendous eye for detail and a very elegant presentation that carried off this dish perfectly.

With the pudding I took a glass of 2009 Famille Hügel Vendange Tardive Riesling (Alsace, France), which is their late-harvest Riesling which they have deliberately let botrytis effect in order to get those wonderful noble rot flavours of marmalade and honey and taking grapes only from their Grand Cru site at Schoenenburg. This was a wonderful wine, elegant yet with a quiet majesty to it. I’d love to pick up a few bottles of this and put these down for my retirement as I would love to see how this develops and matures over the years.

After the main meal was over, we were asked whether we wanted to take coffee on the restaurant’s jetty overlooking the waterfront; there was only one answer for this – yes, please! We took our seats and as it was a glorious late-summer’s day took the opportunity to bask a little in the sun and soak in the ambience of this quintessentially English rural idyll. After a little while, we decided to extend our stay a little by ordering a gin and tonic; with such a setting and such a glorious day we were in no rush to leave. After luxuriating a little longer, the time had come to depart and brave our return journey by train to London (which sadly was no better than the way out – thanks First Great Western).

This was expertly cooked food, presented beautifully and served with real panache. The experience is one that I think you can’t fail to enjoy, it absolutely lives up to the expectations of somewhere that has held those three Michelin stars for all of those years. If you are looking for innovative cooking techniques or wacky flavour combinations then this isn’t the place for you, however such is the gastronomic prowess of Bray that you can find those just down the road at The Fat Duck (if you’re able to get a table that is). This is a restaurant to visit for timeless classics cooked to perfection, a wonderful place to celebrate seven years of marriage.