I recently made a trip to the Coast Blanca, where we spent a lovely couple of days with my cousin and her husband (in a small town near Alicante) and then went on to spend four nights in Valencia. I had heard many good things about Valencia so my expectation levels were already high, so I am very pleased to report that I was not at all disappointed – Valencia is a gastronomically-exceptional, gorgeous, interesting, chilled-out and fit city – I will try to justify statement in this article! The old town (designated a UNESCO World Heritage Site in 1996), as with most cities, has most of the sites and architecture and we did a nice walking tour around this area; fortunately, there are plenty of lovely tapas bars and restaurants in this area too (more on that later). In an area towards the harbour (which is few kilometres away) is a series of incredible looking museums known as the Ciutat de les Arts i les Ciències (City of Arts and Sciences): 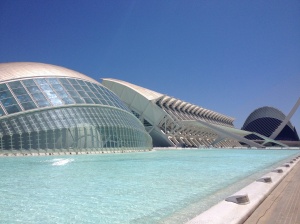 We visited the simply wonderful aquarium (which knocks spots (and everything) off the London Aquarium, with a fascinating selection of marine life from all climates and walk through tunnels, allowing you to get up close and personal with a shark: 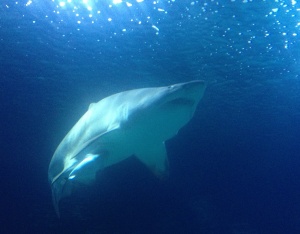 Connecting the old town and the museums is a wonderful “green way”, a park with plenty of space for running, cycling, roller-blade, skateboard, playing and concerts (I saw a wind band playing on a stage in the park). This park was created on the riverbed of the former river Turia, which was created following a flood in the 50s, after which the river was re-routed. We were staying in a hotel nearby the museums, but it was lovely to be able to cycle the c. 4km to the old town along this gorgeous series of parks. However, we were not the only people to take up this option; the running/cycling lanes were absolutely chock-a-block, as it seemed that everyone in Valencia was taking the opportunity to get some exercise in along this scenic trail.

You’ll be relieved to know, I imagine, that I did not pass up the opportunity of visiting this area without making sure that I sampled some of the local gastronomic delights. Here are some of the highlights:

We discovered an exceedingly simple, but truly memorable breakfast option whilst in Valencia. This consisted of a tostada (a slice of toasted rustic bread covered with olive oil and freshly made tomato pulp), coffee and freshly squeezed orange juice:

The beauty of this dish is that it is made from everything that the area does well: wonderful bread, rich olive oil, fresh Valencian oranges and the tomatoes. Great tomes could be, and I’m sure have been, written about tomatoes in Spain – but they are quite simply amazing. Typically the dish photographed would cost about €3 and certainly got our day off to a good start.

Tapas as a concept has been exported to a number of countries and most people are familiar with it. Or at least, they think they are. However, I found that certainly outside of Valencia in quieter/smaller environs, tapas is quite different to the way that it is presented in the UK. The concept goes like this: you go to a tapas bar and order a beer or glass of wine, with your drink you’ll be given some olives or some bread. When you order your second drink, they’ll bring you another small plate, maybe some cheese or a little pastry dish. After a few, people will tend to move on and go to a new bar. This is all done, in true Mediterranean style, over a rather prolonged period of time. The tapas dish itself, therefore, seems to be something to accompany your drink – perhaps something that if implemented in the UK could do something to challenge binge drinking?

However, it is also possible to go into some bars and order a number of tapas plates in order to make up a lunch or evening meal. We did precisely this in a number of locations and here were some of the highlights:

Whilst in Jumilla (not in the Valencian state, but in Murcia instead) at one of the wine Bodegas, we were recommended to go to a restaurant called San Augustin. It was absolutely buzzing when we went there and we worked our way through a veritable feast (driven perhaps by having been wine tasting for a couple of hours) including:

When we were in Valencia we took the opportunity to visit a couple of much-vaunted tapas bars, both of which were in the old town and I would highly recommend. Firstly, we went to Sagardi (http://www.sagardi.com/restaurantes/34/sagardi-valencia-centro) where they feature pinxtos, which are delightful little sandwiches on a cocktail stick – each costing a mere €1.95 each. Below are a selection that we tried, featuring: Dolce Latte with Damson Jam and Walnuts, Tuna with Tomato, Paprika and Pimento, a Stuffed Pepper with a tuna and anchovy paste filling, Smoked Salmon and Coleslaw:

And last, but certainly not least, one featuring a Morcilla sausage!

After this we went to a well-known tapas eatery called Tasca Angel. We went there as we’d been told did the best grilled sardines in Valencia. Well, I didn’t try all of the sardines in Valencia – but I can confirm that these were certainly excellent! We also had some grilled Pardon Peppers and Mushrooms – which made excellent accompaniments to the sardines. 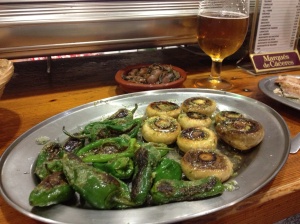 On another evening we treated ourselves to a meal in another Valencian institution, Casa Montaña (http://www.emilianobodega.com). We arrived here dead on 8 o’clock (when it re-opened for dinner) and we were very glad that we did as shortly afterwards it was absolutely heaving. You feel that you are eating in a Bodega as the walls are flanked with wine barrels – and for good reason, the owner claims that their wine list has over 1,000 different wines on it! It mostly (and pleasingly) focuses on local wines. Once again we ordered plenty of food so that we could try as much as possible:

Unfortunately I didn’t bring my camera with me so I didn’t get any photos this time. However, I can recommend the restaurant – which is conveniently placed not too far from Valencia’s lovely beaches.

In another restaurant (where we went to eat Paella predominantly, see below), we were given a charming little plate of the most delicious snails that I’ve ever eaten. They were served in a slightly spicy, but very tasty, broth:

When researching Valencian cuisine, one thing became immediately apparent to me – I was going to have to try Paella. I imagine that everyone is familiar with Paella as a dish, but its spiritual home can be found in Valencia, where it started off as a peasant dish. As such, the original incarnations of Paella didn’t have the seafood trimmings that we are so familiar with today; therefore the traditional Valencian Paella is served with butter beans, broad beans, rabbit, snails and kidneys, along with, of course, the familiar saffron-infused rice. The result is a truly spectacular dish; it is rich, flavoursome, hearty and warming:

We had this in a nice little restaurant in the old town called Bar Almudin. It was run by a very amiable chap who let us try a number of wines before we selected what to drink (which was very welcome!) I was very glad to have tried this wonderful dish in its home city; however I would also liked to have tried the seafood version too. I suppose there’s always next time…

One thought on “Eating out on the Costa Blanca”

I’ve recently been getting into cognac in a big way (see link in my bio for a blog on this). . I recently treated myself to some @riedeluk tulip cognac glasses (which I am VERY happy with!) and a lovely bottle of H by Hine VSOP from @hinecognacs. This is very much the good life...!
Free wine!!! Well not exactly. Over the last few months used the Vault function on my @revolutapp bank card to round up all purchases that I make, with them putting these pennies into a separate account as a form of savings. I recently got to enough money in my vault to treat myself to a case of 2006 @lopezdeherediaoficial Vina Tondonia Reserva, probably one of Spain’s most famous white wines. I don’t often get to buy cases of wine as I want to try as many different wines as I can so tend to focus on purchasing variety over quantity. However, I’m really looking forward to seeing how this wine shapes up over the next few years!
A rather stellar line-up of wines to see in the New Year (and new decade). . We started with a @bodegastradicion 30yo VORS Palo Cortado, which was a sublime accompaniment to some tapas - inspired by my sister-in-law who was visiting from Andalusia. . For the main we had a 1975 Leoville-Barton, which I was incredibly excited about. It didn’t quite live up to my expectations, but it was certainly a memorable wine that went beautifully with our Beef Wellington. . To see in the New Year we opened a 2015 @juveycamps Brut Nature Reserva da Familia. JyC is an absolute favourite of mine, having visited them a couple of years ago - this did not disappoint, it had a softened a little and was an extremely enjoyable drink. . I hope that you also had something delicious over the last few days to commemorate the passing of time!