So, after you’ve been for lunch at Noma on your first day in Copenhagen, what do you do for food on the second day? This was the dilemma that we faced a couple of weeks ago. To be fair, it’s not the worst problem to have.

Fortunately the solution was very simple. As Noma’s fame and international renown has grown, it has given the chefs that work in its hallowed kitchens the opportunity to branch out and create a name for themselves. The Noma alumni have opened a number of restaurants across Copenhagen as they seek to make their own mark on the gastronomic world; one such alumnus is Anders Selmer. We headed to Selmer’s restaurant, Fiskebar (which translates as “fish bar”) in Kødbyen, Copenhagen’s trendy Meatpacking District. The restaurant is set out in a very polished and chic manner, which contrasts its setting amongst some rather bleak warehouses and fishmongers. The lighting is set very low, almost like a nightclub, with small, low-hanging lamps illuminating the table. In the centre of the restaurant is the Fish Bar, where the waiting staff get the drinks together. You can eat at the Fish Bar (which doesn’t take reservations) or take one of the tables around the edge of the restaurant – which is what we did.

The focus of the restaurant is, unsurprisingly given its name, on sea-food. The menu is divided into raw foods, medium plates from the hot kitchen and large plates. This allows you to construct the meal according to your own personal predilections (and levels of hunger). We wanted to sample a bit of everything so decided to take their nine course tasting menu.

Two of the raw dishes (Razor Clams and Trout)

We started with the raw food courses. We had a selection of three dishes: Scottish Razor Clams served with Fennel, Tarragon and Hazelnuts; Trout from Bisserup (Denmark) served with Corn, Mustard and Capers; Mackerel (of which I neglected to write down where it came from). The concept of raw fish is not in itself novel, however it was a very interesting start to the meal to focus on three different dishes all focusing on raw fish. The overriding experience from these dishes was one of cleanliness and precision. The dishes were all balanced very nicely with the accompanying ingredients carefully selected to highlight the quality of the fish. The star of this course for me was the Razor Clams, the shell that they were presented on was edible; the hazelnuts added a pleasing toastiness. As you can see from the photo the dishes were presented beautifully on a piece of dramatic, black slate for added impact. The meal was off to a good start. 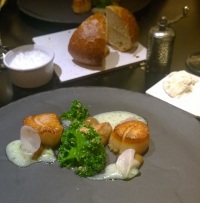 After this we moved on to the “warm dishes from the hot kitchen”. The first of these was a plate of Seared North Atlantic Scallops served with Sweetbreads, Smoked Onion, Curly Kale and Celariac. At this level, it should go without saying that the scallops were cooked to perfection, and they were; but these were absolutely delicious. They were substantial in size and had a wonderful sweetness to them. I must say that I also enjoyed the sweetbreads that were served with them and the flavour of the smoked onion really gave the dish a nice overall balance. This was seriously impressive cooking and I loved it! 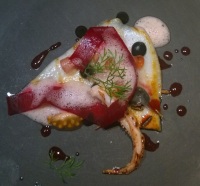 Next up we came to Chargrilled Danish Squid served with Tomato Heart and Black Garlic, Blackberry, Beetroot, Lardo and Wild Rice. The tomato heart was cleverly presented in such a way that it seemed to resemble the squid that it was placed on top of. The squid itself was not the rubbery squid that you get too often, it was deliciously tender, whilst still maintaining a great texture. The chargilled cooking technique did not impart an overly smokey flavour on the squid itself and was quite subtle.  I must say that I couldn’t place all of the accompanying flavours individually, but they melded into something that was, taken altogether, rather lovely. 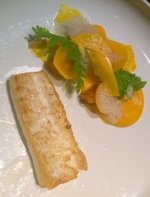 The last of our warm dishes was one of the restaurant’s large plates. It featured Hake from the Western Shores served with Sweet Potato, Pearl Barley, Tarragon and Scallop Roe. The accompanying elements were prepared very nicely, with the sweet potato lending a sweetness and the pearl barley adding a nice textural feature; however, the star of the dish was the wonderful hake. The hake we were presented with was a very decent size and had one side pan fried with some butter to add a crispiness, but the rest of the fillet was flakey and melt-in-the-mouth tender. It had a somewhat firm presence too, which would be expected of one of the more meaty fish in the ocean. We very much enjoyed this dish, it was satisfying to eat, not just because it was nicely presented or with a clever combination of ingredients, but also because it was cooked so well and presented this wonderful fish in a glorious manner.

For our dessert courses we were each presented with a wooden board upon which were laid three beautiful and individually crafted desserts. They were: Swedish Sea Buckthorn Tart served with licorice and orange; Danish Apples served with Hazelnuts, Praline and Calvados; and Beetroot and Pear. All three dishes were presented in a similar manner, with vertical lines of pudding which were deconstructed to a fashion. The puddings had those familiar quenelles of ice cream and dots of creams, sauces and flavours placed artistically across the board. Particularly impressive was the apple and calvados dish which was absolutely delicious. I also really enjoyed the sea buckthorn dish, especially as it is an ingredient that doesn’t make its way over to the UK very often and has a rather distinctive and pleasing taste. These desserts were a lovely way to finish a wonderful dining experience.

To go with the food we ordered a 2012 Silvaner Trocken ‘Nature’ from Weingut Odinstal (Pfalz, Germany); I have concentrated so much on German Rieslings recently that I was keen to give a Silvaner a go… The wine was golden yellow and quite full coloured in the glass. On the nose it had a rather Burgundian twinge to it, slightly musty and herby, but with elements of toast and butter too. On drinking it was bright, with a good level of acidity; it had a pleasant note of grapefruit to it. On the mid-palate it had a nice and fresh profile that made it very suitable for accompanying the food that we were eating. It did not seek to shout over the food and drown it out, instead it sought to sing sweetly with it in a beautiful duet. I enjoyed this wine a lot and gave it 8.0/10.0; however, as is often the case in Denmark, I felt it was a bit overpriced (it worked out at about £50/bottle).

Overall, this was a fantastic dinner. We made our way through nine courses and they were all of excellent quality. The restaurant does not currently have a Michelin Star, but I would guess that one isn’t too far away. Having eaten there one day after having eaten at Noma, it was impossible not to look to make a comparison; both have a focus on showcasing wonderful, local ingredients and presenting them in a beautiful manner. The food at Fiskebar is really very satisfying; I liked the journey through raw fish dishes, into cooked fish dishes and into the sweets.

One thought on “Fiskebar”