One of the restaurants that has been on my List for quite a while has been Pizarro in Bermondsey (SE London). José Pizarro will be familiar to a lot of people interested in the British gastronomic scene; he makes regular appearances on TV programmes and is a frequent contributor on all kinds of social media platforms. He has a very nice tapas bar (the eponomously titled “José“) on hip-and-happening Bermondsey Street which I love going to (even if it is always rammed!). However, a little further down the same street he has a more traditional style of restaurant (the also eponomously titled “Pizarro“). We went there a couple of weeks ago and were very impressed.

The first thing that we noticed (I say “we”, but it was really my wife – who has the creative eye) was that the place was decorated beautifully – it had the feel of rustic-meets-industrial with wooden panelling and exposed brick work contrasting with some metal work.

Whilst we were waiting to order we had a couple of aperitifs – I had a glass of Fino Clasico from Fernando de Castillo, which was everything that you want from a Fino; dry, sassy and mouth-watering. My wife had a glass of 2011 Raventós I Blanc “de Nit” Rosado, a rather delightful rosé Cava. Both perfect for getting our appetites going as we perused the menu. 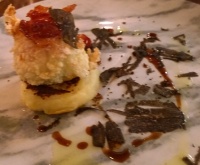 After a fun pre-starter that we had called a Bermondsey Bomba (a lovely, lightly fried breaded potato cake with some spicey sauce and meat filling) we moved on to the starter. I chose a Truffle Stuffed Fried Egg with Mashed Potato and Crispy Ham, which was spectacular. As you would expect the first thing that I did was cut deeply into the Fried Egg to release the drama of the yolk oozing all over the plate. This dish was wonderful in its simplicity, a breaded egg, but when coupled with the fried fragments of jamon and the shards of truffle, the plate was lifted to another level. 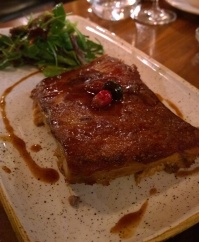 For my main course I wanted to push the boat out and went for a Roasted Segovian Suckling Pig with Cranberry Sauce. I wasn’t quite prepared for the slab of pork belly that was about to be placed in front of me. I know a fair few people who would view this as food heaven, a huge hunk of pork belly and a little side garnish of salad. This was not small portion, haute cuisine; this was big, bold food that left you very, very happy. The pork belly was deliciously succulent and juicy; there weren’t a lot of spices or flavourings put on to it, it was really about demonstrating the quality of the pork. The top of the belly had been crisped up nicely to give some crunch to the dish. I must also say that whilst a lot of people would, understandably, get carried away by the pork belly; my wife and I were also incredibly impressed with the dressing on the salad – so much so that we asked the waiter for the recipe! We were convinced that there was some PX in there, but apparently it was red wine sherry vinegar with honey. Definitely going to be trying that one out at home!

To accompany the food we chose a 2012 Oda Blanc from Castell del Remei (Chardonnay and Macabeo blend) which had a touch of lemon on the nose at first, which gave way to some peachy flavours; it was fragrant and aromatic and had tell-tale signs of oak through vanilla and smoke notes. On the mouth it was really nice with good levels of acidity, which balanced the fruity, juicy and lush flavours. The wine had a decent body to it, which stood up well against the food. Quality: 7.0; Value: 8.0. 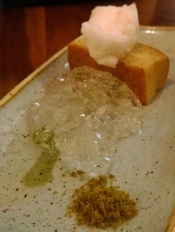 When reading through the menu there was only one dessert that we were going to have: Gin and Tonic “on a plate” with Mediterrenean Botanicals. How could anyone not be intrigued by that title?? What emerged was a cake with rosemary and basil in it, a lemon sorbet, some dried olive powder and, of course, some gin jelly featuring a Spanish (naturally) gin, Gin Maré. This dish was a lot of fun, when we combined everything together it tasted, unsurprisingly, of a gin and tonic; the kind of gin and tonic that you would have on your holidays in Tuscany just as the sun was setting and the atmosphere was just turning from lazy afternoon to electric evening. This was a great idea, we would have suggested that the cake be smaller and there be more sorbet, but other than this I would say that this was a really fun end to a wonderful meal.

I decided against some post-dessert cheeses, but instead opted for a digestif, a Spanish Brandy called Cardenal Mendoza and boy was I glad that I did. It was very deep in colour and had hints of raisins and honey on the nose. Some brandies burn as you inhale, but this really didn’t. On tasting it was powerful, with definite alcohol presence, but was mellow and warming; there was a slight treacle to the taste, which had tremendous depth to it. I don’t drink an awful lot of Brandy, but I will do going forwards, this was just wonderful.

After a couple of visits to José, my expectation levels wer pretty high for this restaurant, and I was pleased to find out that they weren’t to be disappointed. This was a thoroughly enjoyable meal, exhibiting Iberian flair and passion on a little corner of SE London. I am hoping to make a trip over to visit my sister-in-law in Andalucia in Spain and this trip to Pizarro reminded me of some of the glorious gastronomic pleasures that will be awaiting us.
For previous restaurant reviews see my Reviews Archive

One thought on “Pizarro by Jose Pizarro”