Most wine lovers have a special bottle of wine on their wine rack. A bottle of wine that sits on the rack and becomes somewhat of an issue. You want to open it at an appropriate moment, but no such event seems to cut the mustard. The longer the wine sits on the shelf, the more of a dilemma it becomes. The opening of it requires an ever increasingly special moment. The wine ends up languishing on the shelf, going past its best; when the wine eventually is opened it inevitably ends up being a disappointment.

To my mind this is missing the point of a special bottle of wine. What better reason for opening that bottle could there be than when spending time with the ones that we love? After all, great company deserves great wine. To this end, two wine writers from the Wall Street Journal, Dorothy Gaiter and John Brecher, came up with an idea to deal with this issue; they encouraged readers on the last Saturday of February to “Open That Bottle” and share it with family and friends. I thought that this year I should take their advice.

What was my special bottle? It probably won’t come as much of a surprise to most of you that it was a German wine: a 2012 Egon Müller Scharzhofberger Riesling Kabinett (Mosel), purchased from the Wine Society. Like most special wines, this one had a story behind it. During the World Cup last year I took part in a fantasy football competition organised by one of my ex-colleagues and ended up coming second, pocketing a nice little cash prize. I decided to spend my winnings on a special bottle of wine and this was it. I’d long wanted to try Müller‘s wines and having acquired one, had fretted about the right time to open it.

So, how was the wine? In a word – divine. In the glass it had an almost green-ish tinge to it and was exceedingly pale, almost translucent. On the nose it had aromas of warm peaches and passion fruit, with a slight hint of that tell-tale petroleum that you so often find on Mosel Rieslings. I was very much looking forward to tasting this wine – when I did, I was in heaven. It had bags of citrus fruits on the mouth; ripe, juicy Seville oranges and limes. There were also some floral notes to the wine too, elderflower came to my mind. I noted that there was a brilliance to this wine in terms of its minerality – it was so pure and vibrant. I am not exaggerating when I saw that the finish from this wine went on for at least two minutes. This really was an outstanding wine in every sense. Egon Müller is rightly lauded as one of the Mosel’s, and Germany’s, finest producers; indeed some go as far as to claim that he is Germany’s greatest producer. I’m not sure about that just yet – I need another windfall now so that I can justify trying out his Spätlese to see how his sweeter wines measure up.  Quality: 9.5; Value: 7.0. 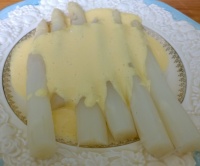 What did we have with this wonderful wine? We went for a traditional German starter, weißer Spargel (white asparagus) with hollandaise sauce. They were nice, but they were Peruvian and not German – I prefer the German varieties. The richness of my wife’s hollandaise (she makes a lovely hollandaise) was the pefect foil for the slightly off-dry Riesling. For the main course we went for Pan-Fried Lemon Sole with a Beurre Blanc sauce and Crushed New Potatoes. I am a bit of a sucker for a lovely piece of fish fried in butter and the beurre blanc sauce is something special too – given the amount of butter that goes in to this dish, it’s not one that you can have very often! 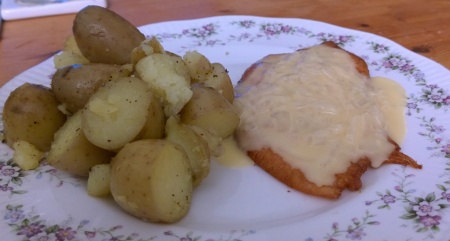 So, the only question left now is… what will we be drinking for Open That Bottle Night 2016?