Some places are hot. They get touted as that place that “you absolutely must go to”, they set the tongues wagging. These places seem set to be destined for greatness but you want to go before they receive too much acclaim as (naturally) prices will rise and tables will be harder to come by. This is the case for The Five Fields, just off Sloane Square in south-west London. A colleague had visited the restaurant with her partner and was so effusive in her praise of it that, knowing my predilection for haute cuisine, she told me to get myself over there post-haste – so I did just that!

The first thing that I need to note is that we were a trifle unlucky with our visit. We went on probably the hottest day of the year so far and as we entered the restaurant we were advised by the staff that their air conditioning unit had suffered a calamitous break-down. As a result, we were told, it was going to get very hot in the restaurant – and it sure did! I’m a pretty reasonable kind of chap and understand that despite best-laid plans, these kinds of things do sometimes happen. The staff were very genuine in their apologies for the inconvenience and gave us regular updates of their ill-fated attempts to perform CPR on the system. We should judge people and institutions not on the basis of their setbacks, but by the way that they respond to these setbacks; the staff at Five Fields dealt with this situation admirably and I commend them for that.

We had decided to pick from the a la carte menu (three courses for £55) as opposed to taking the Tasting Menu. The starter I chose their “Rock Pool” which featured Tuna, Oyster, Sea Urchin and Smoked Eel. As you will be able to see from the picture this was an extremely prettily plated dish with great care evidently having been taken in putting it together. Every element had been carefully assembled and built in a neat stack on a stylish tile. The edible flowers, micro-herbs and micro-vegetables all added to the sophistication of the dish. The smoked eel was my favourite individual element, however the true joy of the dish was the combination of the different flavours and textures. This was the prettiest rock-pool that I had ever tasted! 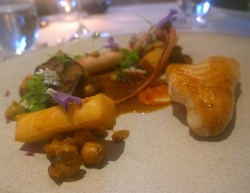 For the main course I plumped for John Dory (always a favourite of mine) which was served with chickpeas, chorizo and octopus. The John Dory was cooked perfectly as you would expect, but the real star of this dish was the octopus. If you imagine eating octopus, you most likely imagine something that is rubbery and tough – this was as far from that as you can get; it had been cooked in a water bath to allow it to be wonderfully succulent and moist. It was simply mind-blowing – certainly the best octopus that I have ever eaten. The dish was nicely balanced in terms of flavours with the smoky, slightly spicy notes from the chorizo acting as a fantastic counter-balance to the delicate octopus and the meaty John Dory. Seriously impressive stuff.

For wine we opted for a half bottle of 2013 Castello della Sala, Cervarro della Salla (Anitnori, Umbria IGT) a Chardonnay. Now I had told the sommelier that I like a bit of oak with my Chardys (after all, “no wood, no good”!), this was a buttery, oaky, vanilla-y extravaganza – it also had some pineapple fruit flavours on the nose. On tasting it had a noticeably high acidity to it; there were smatterings of elderflower and red apple. It balanced very nicely with the food and all-in-all I was very pleased with this wine. Quality: 7.5; Value: 4.0.

Following on from the main it was cheese time…! It was a typically nice selection with the soft goats’ cheese and a pleasingly nutty comté being my particular favourites from this board. To go with the cheese I reached for the port – a Quinta da Gaivosa 20 Years Old Tawny Port. This had a nice depth to it with its age allowing it to have developed some rich, deep spicy aromas to compliment the fruit.

I really enjoyed this meal (despite the heat!); the quality of the food was excellent, the staff’s service was very good and the ambience of the restaurant was just what you’d expect in a classy, fine-dining establishment. If I were a betting man I would put some money on The Five Fields getting a Michelin star within a year or so.

Reminder: you can find a list of all of my previous reviews in my review archive. You can also get email alerts for my future posts by clicking below on the “Follow Blog via Email” button – that way you won’t miss any of my future posts!

One thought on “The Five Fields”