India and Indian food has always fascinated me, probably because I have Indian heritage (my grandfather served in the Indian navy and my father was born in India). There’s something about that richly exotic country that sparks a fire inside me. I haven’t visited it yet, but I hope to do so in a few years time for a grand family reunion. 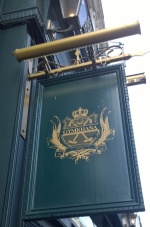 Until then I plan on learning as much about India and, in particular, Indian food as possible. Last year I visited a triumvirate of fantastic Indian restaurants (see my post on them by clicking —> here) who all demonstrated that there is a world of possibility in Indian cuisine, which goes far beyond what you find in your typical neighbourhood curry house – not that I am knocking these, of course! However, high-end Indian cuisine uses spices not as something with which to prove your masculinity, but instead to carefully enhance and compliment flavours in dishes. Furthermore, there exists considerable regional variation within “Indian cuisine” and this can have a dramatic effect on what meats (if any) or spices are used therein.

With the aim of improving my knowledge and understanding of the variety within Indian food, I was excited to take the opportunity when my brother was visiting recently to book a table at Gymkhana in Mayfair. This was a restaurant that I had long wanted to visit, but had become more difficult to get a table due to its recent award of a Michelin star. We went on a lunch-time and were shown to a table downstairs. The decor of the restaurant deliberately evokes a colonial feel and is supposed to transport one back to the Gymkhana Clubs which were the Private Members’ clubs of the British Raj where men (and only men) would gather for sports and social events. 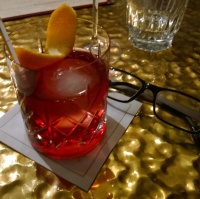 As you gaze around the wall there are mementoes and memories from hunting trips, polo tournaments and a few signed pictures from members of past touring Indian cricket teams. There is a comfortable old-wordly feeling to the downstairs dining room, which features a bar with a very impressive selection of spirits. As an aperitif I went for their NOgroni, which featured House batch NOgroni combining Tanqueray Gin infused with masala spice, cherry wine and Campari, aged for 23 days in oak barrels. Yum! 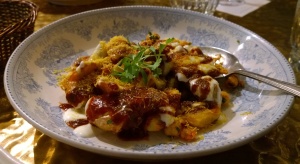 We decided to eat from their four course Taste of Gymkhana lunch menu with accompanying wine flights. We started out with Potato Chat served with Chickpeas, Tamarind and Sev. I have long been a fan of Chat, ever since my student days when I lived off Curry Mile in Manchester and a container of cheap, but delicious, Chana Chat made a great student snack; this version certainly did not disappoint. The thing that I really appreciated in this dish was the contrasts, you had the substance of the potatoes and the chickpeas accompanied by the crunch of the chat. You also had the sourness of the yoghurt juxtaposed against the sweetness of the tamarind. On top of all of this was a spicy profile to the dish which just kept building and building. All in all this was a great starting dish, which was served with a 2014 Verdejo from Bodegas José Pariente (Rueda, Spain) which had a nice crisp apple bite to it, but slightly struggled against the build up of heat from the dish. 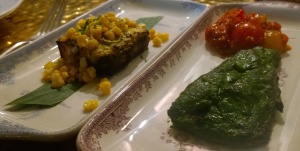 The next dish was a Hariyali Bream served with Tomato Kachumber. The Bream was deliciously delicate and moist. The fish was coated in a lovely mix of spices which once more left a picture that evolved and morphed for a long time after you’d finished eating it. The accompanying wine with this course was a 2013 Riesling ‘Gelblack’ from Schloss Johannisberg (Rheingau, Germany), which had a delicious Honeydew Melon like brightness to it. The wine was clean and fresh and was a nice accompaniment to the fish. 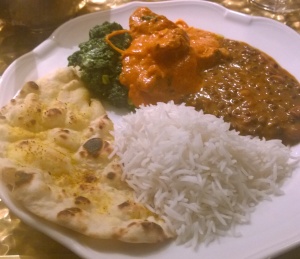 For the main course I chose the Chicken Butter Masala which was served with Dal Maharani, Saag Makkai, Bread Basket and Basmati Rice. The chicken had been cooked in a Tandoor and had an intense smoky flavour to it. The dal had an incredibly rich and meaty flavour to it that was so intense that I had to ask the waiter how they got such a flavour in the dal – it turns out that they cook it overnight and add a lot of fenugreek to the dish. A truly remarkable and memorable accompaniment. With the chicken we had a 2012 Avatar, Teusner, (Barossa Valley, Australia), which was a GSM blend (Grenache, Syrah and Mouvedre). The wine had a nice aroma of vanilla and cloves, which was accompanied by a slight whiff of smoke. The tannins were towards the lower end, which gave the wine a juicy and ripe flavour profile. The wine tried admirably to stand up to the intense aromas of the main course but in truth couldn’t quite cope. 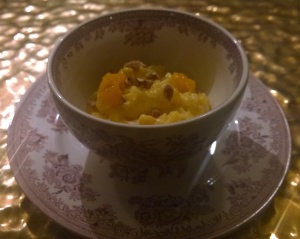 Dessert saw us have a Cardamom Kheer, which was like a rice pudding with some gently sweet cardamom flavours through it. There were some little segments of mango kulfi in the pudding along with some pecan crunch. At the bottom of the dish was a spice paste which had flavours of licorice and aniseed. I really liked this pudding with its layers of flavours, others within the group didn’t like it as much – partly, I guess, because they don’t like aniseed! With this course we had a 2012 Gewürztraminer Selección de Granos Nobles from Luigi Bosca (Argentina). The aroma profile was classic Gewürztraminer: floral and blossom notes, with Lychee, Turkish Delight and Honey the dominant characteristics that I could taste. On the palate the wine was rich and full, but with a decent level of acidity through it. It started off sweet with honey and then settled into more floral notes. A very pleasant wine that was a great match for the complex flavour profile of the pudding.

There you have it – an absolutely fantastic lunch, with deep, complex and intriguing flavour profiles, demonstrating and enhancing fantastic ingredients and very clever cooking. The Michelin Star recently awarded to this restaurant was richly deserved. I heartily recommend anyone interested in India – or Indian cuisine – to take their senses on a trip through history to India’s imperial past.