When the 2016 Michelin stars were announced there was the usual flurry of activity on social media with various people claiming that institutions that they held dear had been overlooked again (Manchester notably has no stars, whereas my hometown of Birmingham now has five; congrats to Brad and Holly of Carters, who I tipped for a star last year (see link), which they duly received). In London, one of the biggest shocks was that no stars were awarded to either The Manor or the Dairy in Clapham – two institutions that are held in very high regard by those in the foodie scene. Indeed, recently The Manor was voted as the top place to eat out at in London by Time Out, so when I was looking for a suitable venue for dinner for my fourth anniversary with my lovely wife I thought this may fit the bill.

The venue itself is a rather fashionable affair, with lots of trendy exposed brickwork and graffiti behind the bar. The lighting level is low and the music was typically funky, although at a low enough level to allow comfortable conversation.

The Manor’s menu makes for interesting reading. The group it up into categories, ‘snacks’, vegetarian plates, fish plates and meat plates. The concept is based on each person ordering a number of different plates from around the menu to make up their meal, with the snack plates costing around £5 – £7 and the other plates costing between £8 and £13. We were advised that the best way to experience The Manor for the first time was to take their Tasting Menu, which we thought sounded like a very sensible idea. 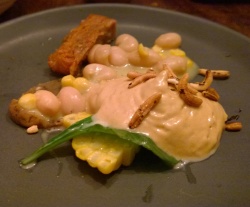 The first of our snack plates came out pretty quickly which was crispy chicken skins, BBQ sweetcorn, coco beans and koji. This was absolutely fabulous, what interested me most about this dish wasn’t the chicken skins (although they were lovely), but it was the corn flavoured with BBQ and koji. There was a lovely sweetness and smokiness to the flavours in this little plate. To accompany this I had my first drink from the accompanying drinks menu. I say “drinks”, because this wasn’t just a matching wine flight; in fact the first drink was a Deliciosa Manzanilla Cocktail made with Cremant de Bourgogne, Manzanilla, Stoli Vodka, Elderflower and Thyme. The cocktail was nice and fresh with the thyme and elderflower coming through predominantly followed by a slight zing from the Manzanilla. 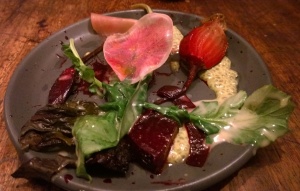 Next up was our vegetarian dish of Smoked Heritage Beetroot served with Pistachio, Chia Seeds and Buttermilk. My wife was delighted to see Chia seeds on the menu as they have been a staple in her ‘healthy eating smoothies’ for the last six months. Some may say that the plate looked a little haphazard, but I liked it. I’ve had smoked beetroot a few times now and every time I’ve liked it more and more; in this case the sweetness of the pistachio was a great match for smokey beetroot. I was given another cocktail to match this course, this one was called “Just Beet It” featuring Calvados, Amaro, Beetroot Juice and Bitters. The Calvados taste came through nicely, although I was most pleased with the match between the sours and smokey beetroot in the dish which worked tremendously well. 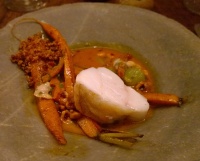 Our fish course was their “Julie Girl” Monkfish with Clams, Carrots, White Grapes and Hazlenuts. The Monkfish was firm, meaty and flavoursome and was balanced brilliantly by the hazlenuts. There was also some nice texture on this dish through the addition of some crunchy quinoa. The accompanying sauce was deep and rich with a slight sweetness to it. With this dish I was given my first wine of the evening, Lugana “I Frati”, Cai dei Freti (Lombardy, Italy) a Trebbiano which featured plenty of acidity, but I was unconvinced that this was the right match for this course – I would have gone for a lightly oaked Chardonnay. 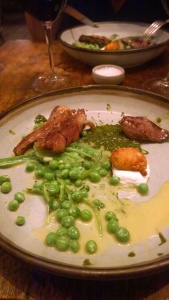 On to the meat course now and we were served with Barbecued Lamb Shoulder served with Heart, Sweetbreads, Anchovies, Peas, Runner Beans and Goats’ Curd. Once more you can see that the plating was in the “splatter” format so loved by modern chefs. This was one of those lovely plates where there were so many fantastic little morsels to discover, I was particularly enamoured with the offal which had a wonderfully intense and complex flavour and texture profile. The peas and runner beans were brilliant and fresh. I also very much liked the freshness of the goats’ curd and the saltiness of the anchovies was a delightful match with for the sweet lamb. All in all, this was a brilliant plate of food. The accompanying wine for this course was a 2013 “Sant’ Andrea” Barbera, Vigne Marina Coppi (Piedmont, Italy) which had a smokey, sweet spice and black fruit aroma. The wine was soft and supple, but it needed the food to really come alive.

I took advantage of the cheese course (of course!) which was a lovely slab of Gouda served with a Black Pepper Cracker and Crab Apple Jelly. After this we had a palate cleanser of a Green Apple Parfait served with a Celery and Cucumber Gin which was essentially a little plate of Hendrick’s!

I’d got chatting to the extremely friendly serving staff and the sommelier during the dinner as I’d been asking lots of questions about the plates and the wines. I was really nice, then, when they asked if we wanted to go and sit at the dessert bar for our pudding courses – the answer was, yes, of course! We sat down and were able to watch and chat with The Manor’s talented pastry chef, Christina, who explained how she was making our dessert courses. 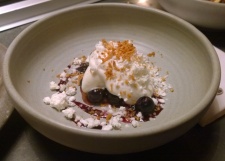 For my pudding course I had Blueberries, Beeswax Sorbet, Potato, Kefir and the Dairy’s Rooftop Honey. The blueberries were nice and juicy, but I enjoyed the beeswax sorbet the most. I had a glass of 2012 “The Welder” Glen Carlou, Chenin Blanc (Coastal, South Africa) which was a thoroughly pleasant glass of wine.

The nice folk at The Manor had one more surprise for us, which was a plate with “Happy Anniversary” written on it in chocolate and some tasty little morsels on it.

This was one of the most fun meals that I’ve had in a long time. The food is refined and interesting, without being pretentious. The focus is on good quality cooking, without resorting to flashiness or theatrics. The combination of cocktails in the drinks menu really demonstrated that they were thinking about the pairings. The staff seemed to all be extremely knowledgeable and approachable, which made the experience even better. I don’t think it can be too much longer before the Michelin people have to change their mind about The Manor.

Reminder: You can find an archive of all my restaurant reviews by following this link.

2 thoughts on “The Manor, Clapham”

Leave a Reply to Please Bring Me My Wine Cancel reply