It’s been a little while since I’ve posted on this website, I had a bit of a hiatus for one reason or another for the last couple of months – but now I’m back, I plan to stay back!

2017 is shaping up to be an excellent year for my wife and I. We already have trips to Kuala Lumpur, Bali, Germany (twice), Spain, Turkey, Australia and New Zealand planned; as well as this, I have lined up some excellent restaurant trips in the UK. Don’t worry, I’m going to offset all this calorie-guzzling through all the training that I have already started for the Berlin marathon in September *gulp*… !!

In January, I decided that I wanted to visit a restaurant that first came to my attention when it was a venue for one of the challenges in Masterchef UK a couple of years back; Bethnal Green’s Typing Room. Typing Room is situated in the beautifully art deco East London Town Hall and as soon as you approach the building you are taken by its aesthetic qualities, with a very grand entrance and a dramatic statue sat atop who wouldn’t look out of place in Rome (see right). We were ushered into the charming dining room which features an open kitchen – something that I always like, makes you feel so much closer to the action.

We opted for their five course Tasting Menu, which started with some rather attractive snacks (as is the way these days) which consisted of Crispy Fish Skin, Smoked Cod and Oyster; an IPA Sourdough with Marmite Butter and Crispy Pearl Barley (true to the well-known maxim, my wife loved the marmite butter, I hated it…); but for me the pick was the Pigs’ Head which had been slow cooked in a pressure cooker, breaded and fried and then served with Smoked Apple and decorated with some pretty wild flowers. This was a homely and delicious morsel that I was very happy to devour!

Our first course from the Tasting Menu was Beetroot, Jerusalem Artichoke and Hazlenut. This was a very pretty, but also very clever dish. The beetroot was done a number of ways, there was some thin slices that had been lightly poached, a sauce that was deep and flavoursome and some powdered beetroot that gave the dish a really striking look. I find it hard to believe that there was a time in my life that I didn’t really like beetroot – those days are well and truly behind me. 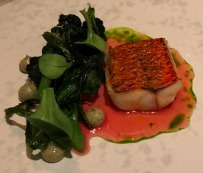 The next course up featured Red Mullet, Purple Sprouting Broccoli, Muscat Grape and Parsley. The fish, I was told, was half poached in some water and then finished off with a blowtorch to complete the cooking and crisp up the skin. One of the more memorable aspects of this dish was the broccoli that had a distinctly fishy taste to it; when I asked the waiter about this, he said that it had been cooked in the water that was used to poach the fish. The Muscat grape sauce gave the dish a nice sweetness that offset the fishiness. There may have been some for whom the fish would have been a little under-cooked, but I really enjoyed it. 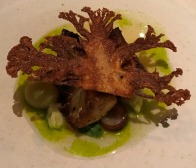 Somewhat unexpectedly we then moved onto a vegetarian dish, Yeasted Cauliflower, Raisins, Capers and Mint. This I thought was a brave and interesting move, something that more and more chefs are doing, trying to find ways to make vegetables the stars of the show. I think this will happen more and more as meat and fish prices are set to rise in the future. The yeasted broccoli was both tasty and also made quite a visual statement, sat proudly on top of the plate. I liked this dish a lot.

Now, time for some meat! This, for me, was the stand-out dish of the evening: Beef Short-Rib with Carrot, Salsify and Smoked Bone Marrow. I mean this was everything that you’d want from a meat dish; the beef was packed with flavour, melt-in-the-mouth succulent, and the grain topping added a little textural interest. The smoked bone marrow added a decadence and opulence to the dish that made it more than a little wicked. This was very much one of those dishes that created a hush at our table as we both savoured the experience of eating it.

With such a great dish, it warranted a special wine. I opted for a glass of 1997 Paul Jabolet Aine Hermitage La Chapelle (Rhone, France), served ex-Coravin. I love northern Rhone wines and had never had a wine from the hallowed soils of Hermitage. The nose was just beautiful, full of truffled salami, warm blackcurrant jam and a smattering of vanilla. On tasting it was divine, there was a definite structure to the wine with some noticeable tannins and a grip from the acidity. The black fruit flavours continued, with a secondary, more-savoury profile, coming through after a while. A rich and opulent wine that was perfect for the stunning beef.

We were intrigued with the selection for the pudding: Sheeps’ Yoghurt, Apple and Dill. When it arrived it was certainly an attractive looking plate, with the bright green from the dill granate and emulsion, the perfectly quinelled yoghurt and the nicely made tube of yoghurt. The tastes were also very nice, although you had to like dill to like this dish as it tasted very strongly of it! I think this was a clever dish, one where the chef gets to demonstrate his technical skill and inventiveness at showcasing unusual flavour combinations; that being said, it didn’t quite leave you with that contended feeling that you get when you have a properly indulgent pudding.

All in all, I was very impressed with Typing Room. The service was excellent, finding that sweet spot where you were looked after with conviviality, but not overcrowded and constantly badgered. The quality of the food was very fine, the presentation and attention to detail was sublime and the techniques presented were carried off very well.

It can’t be long before this place is awarded its first Michelin star; I would definitely recommend a visit.