When you’re trying to work your way around the restaurants of London (and there are plenty on my List to get to still…!), it doesn’t seem like it would be a good idea to return to places that you have already been. However, there are good reasons why you may want to; such as reliving the experiences that you had previously with friends or family, or perhaps to try out another aspect of the restaurant’s offering.

Our return trip to Pollen Street Social a couple of weeks’ ago was for both of those reasons; we were celebrating my sister-in-law’s birthday and were trying out their lunch menu (after having had their Tasting Menu on our last visit – review HERE)

As it was a celebration we though it only right to celebrate with some BUBBLES…! I was very tempted by a glass of the 1995 Charles Heidsieck Blanc de Millenaires, Blanc des Blancs but I couldn’t quite justify the £28.50/glass! Instead we went for a more local offering, a glass of NV Coates and Seely Brut Rosé (Hampshire, England), which was crisp, bright and very tart, with flavours of raspberry and redcurrant; a great aperitif wine.

We were ordering from their three-course lunch menu, but this did not stop them bringing some wonderful pre-starters, which were crafted around an afternoon tea theme. A delightful selection of morsels, with my favourite being a delicate pastry case filled with a vibrant beetroot cream and some faux caviar on top. We were also served some “mushroom tea”, which isn’t quite as it sounds (something that you might brew as a student), but instead a very flavoursome mushroom consommé served in a lovely teapot, to help reinforce the afternoon tea theme.

For my starter, I went for a slightly unexpected choice. I was first considering going for the Pressed Terrine of Lancashire Duck and Game, which sounded just splendid. Instead I went for their Paington Harbour Crab served with Meat Radish, Lemon, Yoghurt and Sake; partly because I thought it sounded so unusual, but also because it had been a long time since I had had any crab. The dish was very pretty, with the garnishes making a nice covering over the generous portion of rich, crab meat, although I didn’t think that they added a lot to the taste of the dish. The sauce was poured over the crab with customary reverence and had a deep flavour to it; apparently it was made from crab meat and sake, which gave it a very interesting flavour. I think that the dish could have done with something sweet on it, to add a different element, but other than that I thought that this was a very nice dish. 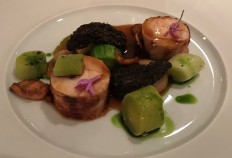 For the main course I went for something classic, Ribble Valley Chicken Breast served with Truffle and Leek Dressing, Roasted Chicken Fat Mash and Mushrooms. This was a properly brilliant dish, probably one of the best that I’ve had in a while. Refined, classy, decadent, hedonistic – need I say more? The chicken ballotine was cooked beautifully, whilst the leeks retained their crunch in a very pleasing manner. The truffle in the sauce made for a pleasing opulence, which I really enjoyed.

But the star of the show, by far, was the creamy mash. I had to eat it pretty quickly as my dining companions started picking at it, such was my effusive praise for it. The mash itself was dreamily smooth and buttery due to the addition of the chicken fat; the crispy chicken skin on top added a lovely crunch. I think you can probably tell by now that I was rather happy with this dish…!

We were going to be drinking a fair amount more wine on this day (it was Open That Bottle Night and we were going home to drink some Tignanello…!), so we decided to go for a bottle of 2014 Auxey-Duresses blanc Les Hautés, Domaine Lafouge (Cote de Beaunes, Burgundy) which was recommended by our sommelier. The nose had definite butterscotch notes to it, with some slightly softer, floral elements (honeysuckle and camomile). On the palate, it was juicy and ripe with notes of candied lemon and ripe pear. It had a really elegant and poised and I was very pleased with this selection as it went very well with the opulent chicken dish.

By this point I was feeling rather extravagant and when I looked at the dessert menu, my eyes started uncontrollably gravitating towards the rather splendid looking cheese trolley that I had passed on my way in. It was wheeled over to me with a degree of pomp, and a little circumstance, which I absolutely loved. The cheese waiter (is that a thing?) took me through the selection of British and Irish cheeses, I opted for a broad spectrum from soft cheeses, through hard cheese, to a blue. I’ll be honest, I can’t remember what they all were, but they were all delicious.

If you’ve followed this blog for a little while, then you will probably be able to guess that if I was having cheese then I was going to order some port with it – and how better than from a Jereboam?! The waiter was struggling to lift the bottle it was so large! The port itself was a classic, a Graham’s 10 Year Tawny Port, which was ideal to match with all of the delicious cheeses.

I’ve come to know that whilst Tasting Menus are often very exciting, if you’re looking for value, lunch menus are often your best bet at starred restaurants. We enjoyed our Tasting Menu a couple of years ago, but I think that we possibly enjoyed our lunch more. This was an excellent meal, we were extremely well looked after and had a thoroughly nice time. We left, four very happy customers.