One of the restaurants that has been on my “List” for a little while is L’Atelier du Joël Robuchon, which is situated right in the heart of London’s West End. Joël Robuchon himself is rightly venerated as a great in the culinary world and has a string of much vaunted restaurants, including his most famous in Hong Kong that holds the revered three Michelin stars (his Paris version of L’Atelier holds two). The setting of L’Atelier du Joël Robuchon makes it an ideal pre- or post-theatre venue and it was the requirement for a pre-theatre tasty treat to celebrate my sister-in-law’s birthday before she was heading off to see ‘Les Mis’ that led me to book this restaurant (the fact that it allowed me to tick another restaurant off the List was merely a pleasing by-product, “honest guv…”!).

We arrived a little bit early for the meal despite it being an early booking (we were very hungry!), so we took the opportunity to go to their bar at the top of the building. There is a roof-top bar area, but this was February and still far too early to consider al fresco drinking, so we took a seat in their very nicely decorated bar area next to a lovely fire. I ordered a Negroni (which is my current drinking obsession, I love them!), this was a very smooth and easy drinking negroni, not quite the same intensity of smokiness that some I’ve ordered have had, which I think made this a perfect aperitif negroni (versus the other kind which are better as digestifs).

After a little while we were told that our table was ready and we headed down to the ground floor where the restaurant was situated. This was another really interestingly decorated area. It felt like it had a kind of Japanese theme to it, with lots of jet black finishes around and the plate settings having a definite Japanese-vibe to them. There was an open plan kitchen which had high stools set up on a counter around it so that some diners could take in what was going on in the kitchen as they ate. We were sat on a private table, but interestingly again it was a table set high with stools to sit on rather than a more traditional lower table and dining chair set up. We were also sat next to a rather fetching green wall that had been installed, with a large number of pot plants trailing their leaves down to create a “living wall” feel (as demonstrated in this lovely picture of the birthday girl and my brother).

As we were going for a pre-theatre menu, we went for their three-course offering (for a very reasonable £45; you could also extend it and go for a five-course meal for £65, which we didn’t due to time constraints).

After the usual pre-starter snacks, the dinner commenced with Le Betterave en Tartare, Glace Moutarde à l’Ancienne et Herbes Fraîches (Beetroot Tartare with a Wholegrain Mustard Sorbet and Fresh Herb). As you can see from the picture the dish was presented extremely nicely, I particularly liked the plate itself – very à la mode. I really like dishes that feature beetroot and thought that this was an extremely interesting idea to replace the traditional beef from the tartare with the beetroot. The combination with the wholegrain mustard was a great idea as it gave a slight pungency to the dish overall, but also a smattering of richness from the cream that it was served with. The little crunch of herbs and salads sat atop of the beetroot was also a nice touch. 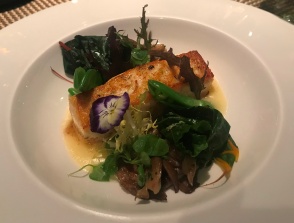 For the main course, I opted for Le Flétan aux Jeunes Legumes, Beurre Blanc Rafraîchi au Thym-Citron (Halibut with Young Vegetables in a Refreshing Butter and Lemon-Thyme Sauce), as I was really in the mood for a nice fish dish. I wasn’t to be disappointed when it came out – a really decently sized portion of halibut which you could tell from inspection was cooked perfectly with a nice colour to the skin on top. Halibut is such an under-rated fish and I was glad to see it being given the respect that it deserves, being made the centre-piece of this lovely dish. The sauce that it was served with was a perfect accompaniment: rich, butter and herby, but kept light enough to not over-power the fish. The little garnishes around the edge, including the attractive wildflowers really helped the dish come to life.

To go with the fish, I opted for a Paul Hobbs 2015 Chardonnay (Russian River, Sonoma). This was absolutely the right match; on the nose it was rich and buttery and decadent, with fruit aromas of apricots and nectarines along with some subtle floral notes. On tasting, it was magnificent – shining bright with lime notes and with a perfect balance to it. When matched against the fish and the butter sauce, this wine both stood up to the big flavours and complemented, rather than over-powered, them. I think it goes without saying, that I was very pleased with this selection!

To end the meal we went for Le Baba au Rhum accompagné de sa Crème (Rum Baba and its Cream… with more Rum!). Rum Baba is a dish that I haven’t had all that often, but I was in the mood for something rich, decadent and boozy and this seemed to tick all the boxes. As you can see from the picture, Joël Robuchon’s particular take on this iconic dish was to present a slice of brioche which had been well and truly soaked in rum in the middle of a rather dramatic black dish. This was offset by some nice quenelles of cream, which had a punch of rum to them too. Oh, and there was also a side serving of some additional rum if you wanted to get more of that rum-hit. As someone who enjoys their rum, I was absolutely thrilled! The slight vanilla profile of the rum complemented nicely the brioche and the cream to give an excellent all-round dish.

There you have it, another restaurant crossed off “the List”; or is it?? The reality is that having seen some of what is on offer at L’Atelier du Joël Robuchon, I am now more keen than ever to try out their Tasting Menu and see what deliciousness they have planned within this (seven courses for £120, including extravagances such as foie gras and caviar). A reminder perhaps, that the only restaurants that we really “cross-off” our lists are those that we decide we don’t like; not those that we do like.