It was my three year wedding anniversary recently. I know that my wife is perfect for me because in the build up to our anniversary I broached the subject of whether or not we should exchange presents, to which she replied “nah, let’s just go out for a nice dinner”. Awesome. We decided to book a table at Pollen Street Social (PSS), somewhere that has long been high up on my “List” of places to visit. PSS is run by Jason Atherton who will be familiar to anyone who watches cookery programmes in the UK. Atherton was the first British chef to complete a stage at elBulli and has worked with such luminaries as Pierre Koffmann, Marco Pierre White and the Gordon Ramsay group; so he has a fair pedigree.

Before we went to the restaurant we popped in to a wine bar around the corner called 28-50. They have three branches in London (Soho, Marylebone and Holborn) and I was particularly impressed at the very interesting selection of wines that they sold by the glass. They don’t just go for your standard wine list, instead they seem to focus on more obscure grape varieties and regions – excellent for me in my attempt to join the Wine 100 Club (more on this in a future post). They also sell wine in neat 125ml glasses, which is perfect when you want to try a number of wines without drinking too much. I had a 2012 Finca Viñoa, Ribeiro, Galicia, Spain (Treixadura/Godello/Albariño) which was refreshing and bright, not huge amounts of fruit (£7.20 for a glass), 7.5/10

So, after an hour we were ready for the main event. I think we always knew that we were going to take the Tasting Menu but we did take a look at the à la carte menu too. The Tasting Menu worked out at £89/head for eight courses, whereas a starter, main course and pudding from the à la carte looked like it worked out at about £60 – £70/head. Not a difficult decision to make really. Interestingly this menu didn’t come with a set wine flight to accompany, but instead the sommelier said that he would suggest at appropriate points various wines that would pair well with the food.

After some interesting snacks as a pre-cursor to the menu we moved on to the first course: Tomato, Watermelon and Tahini Gazpacho with Tuna Ceviche, Remoulade and Coriander. The soup had rather interesting flavour, naturally there was tomato, but the watermelon added an acidity to it and the coriander and tahini gave it a touch of warmth, with the tuna ceviche gave an added textural element. My wife had a problem with the first course which was that she doesn’t like watermelon, so it was suggested that she take one of the starters from the à la carte which would be prepared in a smaller size. She chose the Beef Tartare with Shavings of Black Truffle and Beetroot, which was actually a masterstroke and I would have certainly chosen if I had the option! What’s not to like there? Beautifully tender raw beef, sharp and sweet beetroot and earthy truffle. Lovely.

For the next course, entitled “English Breakfast” we were presented with what looked like a boiled egg. Obviously there was more to it than that though! Inside the egg were layers of all of the constituent parts of an English Breakfast in pureed form, including mushrooms, tomatoes, potato, egg and topped with bacon bits. The best thing to do was to try and get a spoonful of all of the layers together and in truth it did have a taste that was somewhat reminiscent of an English Breakfast. This was clever more than tasty, but I did like the way that it was presented.

With the first two courses I was given a 2012 Vaillons Chablis 1er Cru from Domaine Jean Dauvissat which had plenty of bite and backbone and a pleasing tenacity to it. It wasn’t bone-dry, it did have a touch of fruit to it, but there was stacks of flinty minerality. 7.5/10

After these two starter courses we moved onto fish courses. First up was a Carpaccio of Orkney Sea Scallop with Kohlrabi, Pomelo, Yuzu Jam, Black Olive and Samphire. The Yuzu Jam was a new one for me and had a nice sweet orange taste to it, but the star was obviously the raw scallop sat on top of the thin disc of kohlrabi, a vegetable that I really enjoy and don’t feel I eat nearly often enough. The second fish dish that we had was probably my favourite of the evening: Cornish Turbot Roasted with Capers and Brown Butter, Samphire, Cobnuts, Grapes and Caper Gnocchi. I absolutely adore Turbot and this dish reminded me why; a really meaty and flavoursome morsel of fish, cooked wonderfully well. The brown butter and caper sauce gave an added richness and the little morsels of light caper gnocchi and grapes complimented the fish fantastically.

To accompany the fish courses the sommelier picked a 2007 Riesling Trocken Gais from Dr. von Bassermann-Jordan, Pfalz. Anyone who has been following this blog for a while will know how happy I was to be presented with a Riesling! This wine had a rather extraordinary nose, aromatic and complex with touches of floral and herbal notes. On the palate it was very clean, pure and bright with a wonderful balance to it. A class act. 8/10 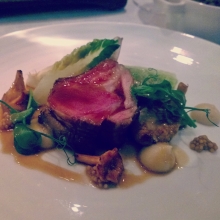 Now to the meat! I opted (there was a choice of two dishes for this course) for the Roasted Lake District Rack of Lamb, Shepherd’s Pie, Sweetbreads, Braised Lettuce, Girolles and Mustard Seed. I was told that this would come pink, which is how I like my lamb – but my, this was very pink. I can think of many people who would have sent it back, but I trusted the judgment of the chef. To be fair, the lamb was cooked and was very nice, but I got the feeling that a minute less and it would have been under-done. I really enjoyed the side portion of Shepherd’s Pie, but it did feel a little odd as a side dish.

With the lamb I was given a glass of 2012 Shiraz from Tapiz (Uco Valley, Mendoza). This was a big and somewhat overbearing wine with oodles of black fruit and a touch of spice. On the mouth it was certainly tannic and a little uncouth. I was a bit disappointed with this wine. 6/10.

Time to get sweet. The first pudding was an English Strawberry Soup with Yoghurt Foam and Cucumber Granité which I completely forgot to take a picture of! After this we moved on to a Caramel Popcorn and Sweet Corn Cream which was served in a rather attractive cocktail glass. It was rather nice, the cream really did have that sweet corn flavour, but all in all it was a touch underwhelming for me. The last of the puddings was a Granny Smith Apple Parfait with Blueberry, Shiso and Eucalyptus. This was more like it! The little red spheres were faux apples containing a parfait flavoured with Granny Smith which was augmented by the crisp, minty freshness of the eucalyptus. A nice end to the meal.

For the dessert courses we were given a glass of 2006 Pinot Gris Grand Cru Sonnenglanz (Bott Geyl, Alsace) which had a floral and fragrant nose. On the mouth it had a taste that was reminiscent of candied oranges with a decent finish. Balanced pretty well with all of the dessert courses. 7/10.

I must note that one of the high points for me was the standard of the waiting staff and the sommelier, who were all very friendly and personable, without being overbearing. There were a couple of fairly large pauses between courses during the meal, but we were in no rush and as such they weren’t a problem.

So, there was have it. Three years of wonderful marriage celebrated in style at the PSS.