First of all, many apologies that it has been so long since my last post. For a number of reasons I have been exceptionally busy in both my work and personal lives; add to this that over the last few weeks my country has decided to have a collective meltdown, it has all been a rather turbulent time.

During such difficult times it nice to have hobbies, interests and passions that one can lose themselves in and distract from all that is going on in the outside world – hopefully. So, it is with great joy that I write this piece about a wonderful meal that I had a little while ago in a restaurant that has been on my “List” of places to eat at ever since I started keeping such a list; Glynn Purnell’s eponymous “Purnell’s” restaurant in the heart of Birmingham city centre. Even though I haven’t lived there since I was 18, Birmingham has always been my home – it was where I spent my formative years and I have many a fond memory from living there. On the occasion of my niece’s Dedication service, I decided to cash in my parents’ Christmas present to me, a voucher to eat at Purnell’s – they know me very well!

The restaurant has a style and glitz to it that you would expect from a 1* restaurant. We were given a nice table that featured views into the kitchen, which allowed us to capture the odd glance of Glynn conducting the chefs in his kitchen, who, it must be said, all looked to be having a rather good time. Glynn’s pedigree when it comes to cooking is simply phenomenal, he has worked with some of the greats: Claude Bosi (whose Hibiscus I visited last year), Gordon Ramsay and Alistair Little, to name but a few.

We decided that in order to see what Glynn had to offer we would go for his six course tasting menu.

We started with glasses of TWO champagnes! After all, why have one when you can have two?! The first was a 1995 Heidsieck, Blanc des Millénaires (Champagne, France) which was wonderfully tart and acidic, with bright lemon flavours – amazing given it was over 20 years’ old. The second was a NV Krug, Grand Cuvée, Brut (Champagne, France); I had long wanted to try Krug and this was going to be my first time – boy, oh boy, was it worth the wait! This was decadent and rich, it costed the mouth beautifully and had a wonderful toast ones that added a voluptuousness to it. The trouble with having now drunk Krug is that it is hard to go back…!

The first course was a truly interesting concoction, entitled “Taste of Cheese and Pineapple: Emotions of Soixante-Dix”, which was a very clever piece in that it harks back to a time in the past (1970, perhaps?) where a cheese and pineapple hedgehog was a regular feature at dinner parties around Birmingham (and other parts of the UK). Glynn, however juxtaposed these flavours of the 1970s against the most modern of cooking techniques; salt-baked pineapple chunks, pineapple that had been frozen in liquid nitrogen, edible silver leaf (to represent the hedgehog methinks); all accompanied with a deliciously-rich cheesy sauce made from Montgomery Cheddar. I liked this, it was simultaneously simple (two flavours) and complex (all the different techniques). A memorable start.

Our next course was Poached Duck Egg Yolk which was presented rather attractively in its shell on a bed of hay. This was a nice dish, the yolk had been made into somewhat of a velouté, which was creamy yet light and had possessed some crumbs of black pudding at the bottom which added a richness and depth to it. I think it probably needed a little dash of black pepper, but overall it was pretty tasty.

Next up was a Chicken Liver Parfait served with Braised White Heritage Carrots, Crispy Grains and Meadow Flowers. The star of the show in this course (as it should be) was the parfait which was simultaneously light and smooth, yet packed with plenty of decadent flavour. The dishes description didn’t mention doughnuts, but it came with two! Again, to me this demonstrated Glynn’s playful and inventive side. It’s saltiness worked really well with the richness of the rest of the dish; when coupled with the textures from the grains it made for a truly interesting and memorable dish. This course was served with a 2013 “En Barberon” Pinot Noir from Stéphane Tissot (Côtes du Jura, France) which had an incredibly smoky nose, with a hint of a biodynamic funk to it. The dominant flavours on the palate were a combination of sour cherry and gameyness, its acidity was a good counterbalance for the rich parfait.

On to fish! We had Scallop Baked in the Shell with Dashi served with Cucumber, Melon and Wasabi, as well as a Tuna Sushi Roll with Sour Soy. This combination of dishes showed a clear Asian influence on Glynn’s cooking and I was very impressed with it. Overall the dish had wonderful qualities of clarity, cleanliness and freshness. Interestingly the scallop was not toasted or crisped around the edges, instead it was gently cooked leaving it wonderfully succulent to eat and presented extremely attractively in its shell. 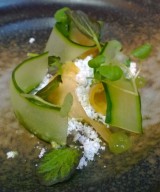 The scallop was accompanied by a very pretty looking cucumber, melon and wasabi powder salad. I particularly liked the way that the strips of cucumber were given some height on the plate to give it some additional grandeur. It came with a couple of Sushi Rolls which I did like, but felt that they weren’t exactly needed. Fittingly we had a Sake to accompany this Japanese themed dish, a Katsuyama, Lei, Junmai-Ginjo, (Sendai, Japan). I am no Sake aficionado, however I very much liked this one, it was quite viscous with a pretty restrained nose; at the front it was quite fresh and fruity, like a juicy melon, then it developed a touch more heat and body. The finish was very long and poised – I liked this a lot and it was a perfect match with the dishes.

Our second fish dish was one of the dishes that made Glynn a household name, his Monkfish Masala that he cooked on the Great British Menu (a popular cooking competition in the UK) back in 2009. What struck me about this dish was that the spicing levels for it were judged just right – Monkfish is a majestic fish and needs to be treated with respect, which is exactly what Glynn did. It was served with lentils, which had not been cooked down to a dhal-like slop and, instead, retained a good deal of their structure which gave a nice textural element to the dish. There was also a good dash of lemon through the dish, which freshened it up nicely. I could see why it was so popular on the Great British Menu! This was served with a 2014 Stopham Estate Pinot Gris (West Sussex, England) which had an aroma that reminded me strongly tropical soft drink ‘Lilt’; on the palate it had a nice zesty acidity which matched up to the lemon in the dish. Not the best wine of the evening, but certainly a good match.

Now it was time for meat with Glynn’s Slow-cooked Neck of Wiltshire Downlands Lamb, served with Slow-Cooked Wye Valley Asparagus, Mousseron Duxelles and Wild Garlic. As this dish arrived the first thing that struck me was the colours, I described it as “fifty shades of green”! I am very partial to Asparagus (despite the terrible revenge it wreaks afterwards) and I was pleased that despite the “slow-cooked” description the Asparagus had retained its crunch. The lamb neck was beautifully cooked and tender and made for a truly memorable dish. To serve with this we had one of my favourite wines of the evening, a 2011 Amarone della Valpolicella from Roccolo Grassi (Veneto, Italy) which was brimming with heady and perfumed aromas in the glass. On tasting it was rich with flavours of stewed fruits and spices, just as you’d expected. This was the kind of wine that you couldn’t sip absentmindedly, it demands your attentions on it.

The candyfloss was the second sweetest thing on the table…

For pudding we again got to see Glynn’s playful side with his “Boooooooom! Raspberries”. As it was brought to the table you couldn’t help but smile, this was a dish that appealed to your inner child and again allowed you to reminisce about trips to fun fairs from yesteryear. From the nice  and fluffy raspberry candyfloss, to shards of raspberry brittles, to a quenelle of beautiful raspberry sorbet.

This was served with a 2013 “Donnafugata” from Ben Rye (Sicily, Italy) which was made from the lovely Muscat of Alexandria grape. The aroma was full of sweet apricots and candied orange peel. It was nice, bright and sweet on tasting, but held a nice acidity to it that stood up to all of the goodies that Glynn had served up.

There you have it. We’d waited a long time to eat at Purnell’s and it certainly lived up to the hype. The waiting staff were incredibly friendly and personable and clearly enjoyed the experience of working in the restaurant. It is great to see such inventive, boundary-pushing and, frankly, excellent cooking going on in my home city – it reminds me of how proud I am to come from such a diverse and interesting city as Birmingham, even if now I don’t get to visit it as often as I would like; something that I shall have to change!

I should also thank my parents for a very enjoyable Christmas present.

Reminder: you can find a compendium of all of my restaurant reviews by following this link.

One thought on “Purnell’s”