As a proud Brummie (ie: someone who comes from Birmingham) I am thrilled at how the gastronomy scene is thriving in the UK’s second city. Previous trips back home have seen me have exceptional meals at Carter’s in Moseley and Purnell’s in the city centre. You can imagine how pleased I was then when for Christmas last year my family bought my wife and I a voucher to go and check out one of the hottest tickets in town, the chef’s table at Michelin-starred Adam’s restaurant in Birmingham’s city centre.

The chef’s table is a wonderful experience and one that I thoroughly enjoyed. You are ushered to a table downstairs where there is a horseshoe-shaped table that sits about 10 people and points directly at the kitchen so that you get a first-hand view of how a top-class kitchen operates (you can see from the picture, left, just how close we were!). When each course is brought out to you, eponymous head chef Adam Stokes comes out and explains what is on the plate and how it has been cooked, which allows the curious to ask any questions they may have (which I, of course, did!).

It is a communal experience, namely that you are sitting with other patrons at the table, we were fortunate in that our fellow diners were a friendly and interesting group which meant that we were able to share our thoughts and observations with each other in a gregarious manner. At the end of the meal as the staff are cleaning down the kitchen (something that puts to shame what I class as “cleaning” – these guys and girls are a whirlwind of energy leaving it sparklingly clean; see the photo right for evidence…!) we were all able to take a guided tour of the kitchen, with Adam showing you all the technology and innovation which he is evidently (and rightly) very proud of.

So, with all that being said – how was the dining experience itself?

The Chef’s table experience is an 11 course extravaganza (more when you count the now-obligatory pre-dinner snacks and the post-pudding sweet treats). With this, I opted for the accompanying nine glass wine flight – now these weren’t small portions, so I was very glad that I took my notebook to make notes during the dinner…!

Our first course was Mackerel with Japanese Custard and Lardo. The custard was set with Dashi and the mackerel had been marinated with coriander seeds for a couple of hours. This was all brought together with a salty broth that worked very well in terms of giving the dish a refreshing profile of the sea. The mackerel was nice and delicate, but was not over-awed by the other ingredients.

Next up was Veal Sweetbreads with Cauliflower and Black Pudding (unfortunately the picture of this course didn’t come out very well). The sweetbreads themselves were delicious, beautifully succulent little morsels made from rose veal (“happy cows”, as Adam said…). The sauce was nice and rich and the black pudding added an extra textural dimension to the whole dish. With this course I had my first wine, a 2014 Domaine Alexandre Bain “Pierre Precieuse” (Pouilly-Fume, Loire) a lovely reminder of how Sauvignon Blanc should be made – richer and broader than those New Zealand wines with juicy orange flavours abounding.

Back to seafood now with Octopus, Avocado, Chorizo and Garlic – a fine-dining take on “surf ‘n’ turf”. The octopus had been cooked low and slow for 12 hours, giving it a very smooth and juicy texture – a world away from the rubbery octopus that you sometimes get. There were some interesting accompanying ingredients – Sea Purslane and Sea Rosemary, a nice nod to the aquatic world; and a variety of creams that went with the dish, including a nice avocado cream. The chorizo and garlic had an intensely smoky flavour that I felt was slightly too insistent. To match this course we had a 2015 Heinrichshof Riesling Trocken (Mosel, Germany), I was delighted to see a Riesling on the menu and this was a new producer for me. It was bright and clean with nice minerality, but lacked a little in complexity. I think if this were me selecting the wine for this course I would have gone with Pfalz or Nahe, rather than the Mosel. 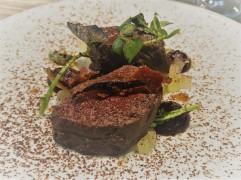 Interestingly at this point we went to a meat course, before returning to the sea for two more courses; with Venison, Red Cabbage and Barkham Blue.  This was probably the most memorable dish of the evening for me, as it featured some really interesting combinations. Over the whole dish some dark chocolate had been grated, which gave the plate an attractive appearance but also an intoxicating smell. Chocolate and venison is a fairly classic match, but this was supplemented by some blue cheese which added a layer of complexity to the whole dish with its salty richness. I loved it, but I could imagine that others would struggle with this. This dish was served with a 2012 Domaine Bastian Pinot Noir (Moselle, Luxembourg), just down the river from the previous wine! On the nose was a touch of smokiness, on the mouth it had sour cherry and menthol-like freshness. I think this was my first Luxembourg wine and I thought it oozed class, a great match for the venison.

As mentioned above, we now went back to fish with Pollock, Crayfish and Dandelion. The pollock had been brined to give it additional structure and flavour. I particularly liked the fried strands of ginger which added a little bit of heat to the dish and contrasted the deep, bisque-like sauce. Another excellently made and attractive plate of food. We had a 2011 R. Belland 1er Cru (Santenay, Burgundy) to go with this course, which I was intrigued by as I mainly know Santenay for its Pinots. The Chardonnay was light and mineralic on the nose, but on tasting it had a broader, richer and more generous profile emanating from the evidence of oak ageing. This was a stunning wine and a great match for the food.

Our last fish course was Scallop, Celeriac, Eel and Apple and was quite simply another fantastic course. The little cube in the middle had been made with slow-cooked pig’s trotter meat and combined with the eel to make a delicious morsel that I would have loved to have had more of. The celeriac was served two-ways – as salt-baked cubes and a puree, both of which were very nice. The scallops were, of course, excellently cooked with a nice colour outside, whilst tender and juicy. With this course I had a 2015 Kooyong Beurrot Pinot Gris (Mornington Peninsula, Australia) which featured a waxy and funky nose with touches of smoke on it, followed by a beautifully fresh and zesty mouth. In my notes it says: “best Pinot Gris I’ve tried” – there you go…! 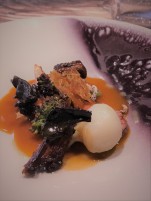 Next up was Lamb, Miso, Baby Turnip and Wild Rice. This was another stylish dish – two different parts of lamb; loin cooked delicately and neatly, neck slow cooked with miso. But the stand out part was the sauce, Adam told us that it was designed to contain all the aromas of a Sunday lunch – and boy did it. It was so concentrated and intense, but welcoming and familiar. Beautiful. This was served with a 2013 Produttori del Barbaresco (Piedmont, Italy) which had a glorious nose with warm red fruits and touches of forest floor. On the mouth it was a serious wine with a lot of structure.

Adam obviously subscribes to the French idea of serving cheese before the sweet as next up was our cheese course, Tunworth and Cauliflower, Adam’s take on cauliflower cheese, with raw cauliflower and pureed cauliflower, with fried onion and mustard seeds all brought together with the Tunworth cheese (which was quite similar to Camembert). I liked this course, but after so many courses some of our group were starting to flag at this point. This course was paired with a very interesting wine, a 2006 Attilio Contini Vernaccia di Oristano (Sardinia, Italy) which is made in the same way as a Juran Vin Jaune giving it a pleasingly oxidative and sherry-like aroma which really let it stand up to the strong flavours in the food. A very clever and interestingly off-the-beaten track selection.

To ease our way from savoury to sweet, Adam once more showed his inventiveness. We had two courses which ostensibly featured the same ingredients, the first was done in a savoury style and the second in a sweet style. So, for Rhubard (Part One) we had grated frozen fois gras sprinkled over the top, along with some cress that tasted of aniseed  and peppered pistachios. All served alongside some pickled rhubarb.

This was followed by Rhubarb (Part Two). There was a granola crumble at the bottom with some hot ginger-beer jelly to add a bit of fire. The rhubarb, cress and pistachios were all the same as last time, but with a focus on sweetness. This was so pleasingly clever that it made everyone smile. This was served with a Tai Shiraume Plum Wine (Akashi, Japan) which had a generous nose that reminded me of Christmas spices and a plummy taste that worked well with the dish.

So, after all of the wonderful food and drink above, we are finally at the last course – Chocolate, Marmalade and Salted Milk Blood Orange, which Adam described on his take on a Millionaire’s Shortbread (I’ll confess that this course I completely forgot to photograph, can’t think why that was…!) It featured a 63% chocolate with caramel, rich orange flavours and crunchy biscuits. A decadent finish to the meal, especially when accompanied by a 1996 Chateau Raymond Lafon Sauternes (Bordeaux) which had all the honeysuckle, lychee and passion fruit flavours that one would want from an aged Sauternes.

After the damp squib that was my previous Michelin-starred dinner (see post here to relive my disappointment), this was the perfect antidote. It was a joyous feast for the eyes, ears, nose and mouth. The combinations were supremely clever and the execution was excellent.

What was also telling was the warmth and enthusiasm from all of the staff, who spoke with genuine pleasure of their enjoyment at working at Adam’s. There is clearly a family-like environment, which is a great credit to Adam and his team.

I would heartily recommend the Chef’s Table experience to anyone who enjoys top-quality food.

I should, of course, thank my wonderful family for giving us such a thoughtful and enjoyable Christmas present too…!

One thought on “Adam’s”