One of the tell-tale signs that you’re a foodie is that when your better half says that she has a plan to visit some relatives abroad, your first thought is… “oh excellent, I’m sure there will be a good restaurant to check out whilst we’re there”. This is exactly what happened when we decided to visit my wife’s uncles and aunts who live near Frankfurt. After a brief bit of research, one restaurant was recommended over and over again – Villa Merton; supposedly one of the best restaurants in Frankfurt (it currently holds 1* status), found in the diplomatic district and set in the site of the old Union International Club. 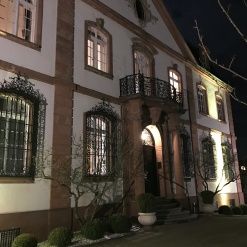 As you approach the building from the outside it certainly looks the part. The architecture is stunningly grand featuring wrought-iron gates, a grand entrance staircase flanked by terracotta pillars and a classical middle-European elegance. Once inside, we were shown to a similarly impressive dining room, with imposingly high ceilings, large attractively-bedecked tables with nice features such as freshly-cut flowers, stylish cutlery and swanky candles. If anything the atmosphere was a little too reverent, only half of the tables were taken (even though it was a Friday evening) and with the high ceilings and no music playing in the room, it left a feeling that reminded me of a rather stuffy library.

Our first course was the interesting titled: “Vitello Tonnato” featuring Tuna Carpaccio, Fried Sweetbreads, Tuna and Wasabi Cream and Basil-Ice. As you’ll see from the picture, this was a rather generous portion size, given it was the first of eight courses we were a little nervous! The dish itself was nice, the tuna carpaccio was delicious and the combination with the basil ice-cream was rather clever. We couldn’t help but feel that overall the plate was a little busy and a little large, I think that the sweetbreads were pleasant, but didn’t add a huge amount to the overall construct.

Next up was Oysters Two Ways with Beef Consomme, Lovage and Lentils. As the plate was set in front of us, we were quite encouraged by it – it certainly looked nice. There was even an additional oyster on the side presented in its shell swimming in a beef consomme. However, the overall effect of this dish was too salty – I like my oysters and don’t mind that “taste of the sea” profile, but I found that the combination of the consomme and the oyster didn’t quite work for me. 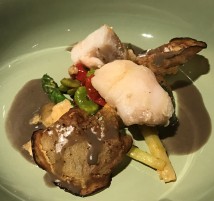 Continuing our seafood start to this tasting menu, we were then presented with a Pan-Fried Cheek of Monkfish with Aubergine Tartar, Artichoke, Parmesan and Olive Oil. Thus far we hadn’t been completely overwhelmed by the food that we’d been given, this course, however, confirmed that we were not going to be having the best meal that we’d ever had. This was a particularly confused plate, it seemed to combine some tastes of the mediterranean (black olive sauce, fava beans and sundried tomatoes (!)), with a turmeric flavour. On top of all of this, were placed two (admittedly nicely-cooked) monkfish cheeks, which didn’t seem to bear any relation to the rest of the plate – seemed to be somewhat of an after-thought. This plate just didn’t seem to make any sense to me.

With our early courses, we ordered a bottle of white wine. Now, I am somewhat of a Riesling-obsessive, and the chance to order a bottle of nice, German Riesling was not going to pass me by. I selected a 2007 Dr Bürklin-Wolf Wachenheimer Rechbächel Riesling (Pfalz, Germany), which had a suitably expressive and luxuriant nose of pineapple, apricot and a touch of honeysuckle. On the palate it had a bucket-load of acidity, coupled with a brilliance in terms of purity of flavour. The taste reminded me of preserved lemons, with an electric-like tautness to the wine that was in lovely balance. This is what good Riesling is all about…!

Villa Merton is supposed to be famed for its use of vegetables and local ingredients, which was showcased in the next course: Ravioli from Field-Salad with Beetroot and Malt-Butter. There was a time when putting forward vegetarian courses in a Tasting Menu, would have been daring, not any more, however. Still, the dish itself was attractive with some striking colours – most noticeably coming from the purple of the beetroot. The malted butter sauce was an interesting idea, but its flavour was so pervasive that it obliterated the taste of the delicate (and rather beautiful) herb-filled ravioli.

After having had a couple of rather indifferent courses (trying to be nice here…), we were rather deflated. We were then pleasantly surprised to find that the next course, a Yuzo Sorbet with Cauliflower was absolutely brilliant. The Yuzu was laser-like in its acidic brilliance with flavours of a tart mandarin and bright lime. The cauliflower ice cream that accompanied the sorbet seemed bonkers, but in fact it was genius – it added a richness to the dish, that contrasted the acidity of the Yuzu sorbet nicely. This was all crowned neatly by some rather exciting sugar-work.

At this point in the meal, we were given our first meat course, a Roasted Barberie Duck Breast with Octopus, Mandarin, Pak Choi and Herbs. This was another excellent course, the duck was, quite rightly, the centre-piece of this dish, a beautiful-pink colour with the skin rendered down fantastically. The other surprising element on the dish was the water-bath cooked octopus, which left it soft and delicate, giving it a delicious texture. The chickpeas that were served as a bed to the duck, had a curried flavour which worked quite nicely alongside the very rich and deep sauce that served to bring everything together.

With this course we took a nice glass of red wine, a 2015 Weingut Spreitzer Spätburgunder (Rheingau, Germany) which had a nose featuring sour cherry and almond notes, alongside smatterings of strawberries. On the palate it had a decadent and expansive profile of cherry richness. A great accompaniment to the lovely duck.

We then moved on to our first sweet course, a

Muesli of Quinoa and Early Rhubarb with Macademia Ice Cream. As you will see from the picture, this was a stunningly beautiful plate of food with bright colours abounded, attractive sugar works to add some height to the dish and an interesting combination of textures. The combination of flavours was nicely put together, the crunch of the quinoa, the bite of the rhubarb and the creamy delectation of the macadamia ice cream. It felt like we were back on track with our Tasting Menu experience…

Until, our cheese course that was… We were presented with Raw-milk Cheese from “Affineur Waltmann” with Chutney and Potatoes. Yes, you read that correctly – potatoes. I asked the waiter if there was some kind of mistake, his response (very matter-of-factly) was that “the chef says that potatoes with cheese is a classic combination”. Well! You learn something every day… I must say that I found the cheese to be excellent, I even enjoyed the roasted potatoes; but together? I don’t buy this as a combination, classic or not.

In a way, this was the perfect way to end what I felt was a very mixed dining experience. Some of the dishes were excellent, some felt confused. Some of the cooking was excellent, some seemed muddled. I found the waiting service was somewhat underwhelming too, it seemed overly casual and a little devoid of attention. I have certainly eaten in better restaurants in the UK that didn’t have a star, I am not sure that if Villa Merton were in London it would keep its starred status.